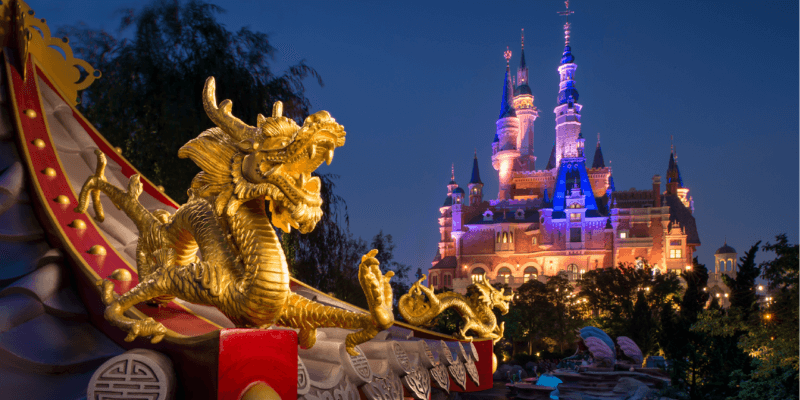 One of the photographers was Matt Stroshane who photo of Shanghai Disneyland literally involved time.  He envisioned a photo that involved a Cast Member, the Shanghai Disneyland Clock Tower, and the Enchanted Storybook Castle in the distance.  With a team of people, and just the right timing, they made it happen to create this photo.  You can read all about the whole story here!

Today, we’re telling a whole different story about Shanghai Disneyland with another one of the photographers that was sent over to China for a month, Kent Phillips.  Because Bob Iger said that Shanghai Disneyland was authentically Disney and distinctly Chinese, Kent felt that he needed to capture a photo that embodied both of those things.  So here is his story about how this photo came to be.

“One day I took a trip on Voyage to the Crystal Grotto, the enchanting boat ride near the castle that includes scenes of characters from beloved Disney films. I was in the boat to take photos of the attraction, but I ended up finding the image I’d been searching for all this time.

As my boat rounded a bend in the river and we passed Mulan, I looked up and … there was the picture I was looking for. The beautiful golden dragon you see here was framed up perfectly with the castle in the background – and the lighting was just perfect. Of the thousands of pictures I took during my time in Shanghai, this one felt like it had the most “pixie dust” on it, given how it seemed to magically appear before my eyes.”

There’s a story behind every photo taken and these Disney Parks photographers have shared some very thoughtful ones with us.  For some other Behind the Camera stories, let’s travel over to the Magic Kingdom Balloon Room and Disneyland Park Matterhorn Attraction.  These pictures are definitely worth more than a thousand words!

Book a your next Disney Trip with Academy Travel by clicking here!