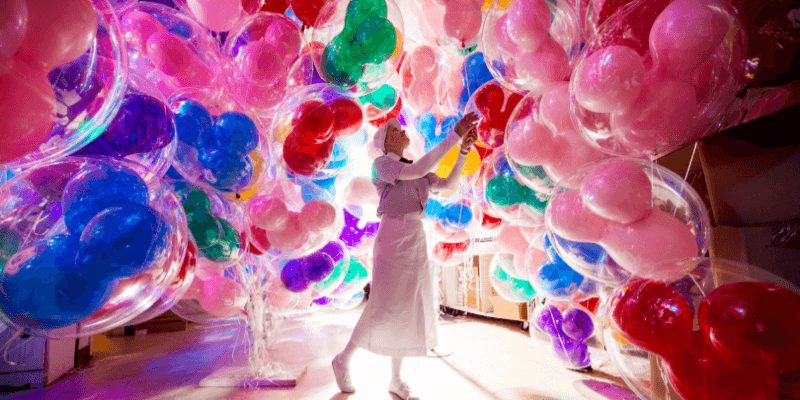 One of the most quintessential pieces of the Disney Parks are the balloons!  Balloons are an often purchased souvenir like a Mickey Ear Hat or Minnie Ears Headband.  You’ll often see guests on their family trip to the Disney Parks pushing a kid in theirstroller with a balloon strapped to it, or guests posing with a bunch of Disney balloons for a great photo op.  A Disney balloon signifies something totally different from one person to the next.

The Meanings Behind Disney Balloons

I don’t know about you, but it makes my heart happy when I see the Disney Cast Members walking down Main Street, U.S.A. with the big bundle of balloons, especially the ones of the Mickey balloon inside another balloon.  It means that I’ve arrived to my very own Fantasyland and can escape into Wonderland like a Disney character for some time.

For other guests, one of the more increasingly popular photo ops now to take a picture at the Disney Resort with the whole bundle of balloons.  And a family of five called The Bucket List Family has a tradition buying the entire bundle of balloons and running around on their Disney vacation, giving away balloons to any kid they could find that didn’t have one just to spread some kindness.

Disney Parks and Resorts’ Creative Photographer Chloe Rice takes us Disney fans behind the scenes on the Disney Property to the Balloon Room to show us how just one part of the Disney magic happens.

She shared capturing a photo in the Balloon Room at Magic Kingdom in Orlando as one of her #DisneyMagicMoments because all those balloons being prepared for the balloon vendor were wrapped around her with love like a hug.  This moment became sentimental to her as she was setting up to capture some other shots that she wanted, the perfect scene unfolded right in front of her without her needed any excess equipment or assistant.  What a wonderful, colorful, beautiful moment of magic that she has given us to freeze in time.

Here’s what Chloe shared on the Disney Parks Blog about the balloons:

“The balloons on Main Street, U.S.A. are one of my absolute favorite things in any Disney park. The colors … the liveliness of them bopping into one another … I just LOVE them!

When I walked into the room on this particular morning a few years ago, balloons were flooding the space, making it hard to even close the door behind me. Walking through hundreds of these balloons – having them all bump up against me and my camera gear – felt like a hug. It was a really magical moment that made me feel lucky to work where I do…It’s moments like that when I’m reminded Disney magic is everywhere.”

On your next Disney vacation, buy a Disney balloon.  See how it makes you feel inside.  Isn’t it magical?  For some other spectacular shots and #DisneyMagicMoments, read up on the Shanghai Disneyland Clocktower and Disneyland Resort’s Matterhorn.

Comments Off on The Magic of Disney Balloons: This Photo Gives You Nowhere to Go But Up!