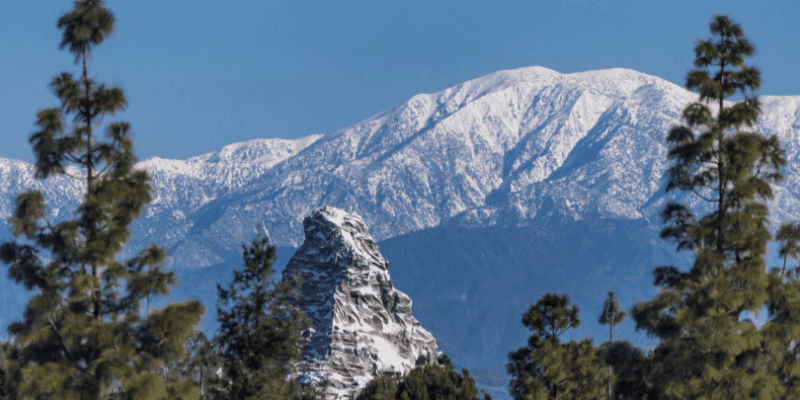 Disneyland Resort in Anaheim has quite a few mountain attractions.  You have Space Mountain in Tomorrowland, Big Thunder Mountain Railroad in Frontierland, and Splash Mountain in Critter Country.  The mountain attraction that stands the tallest and can be seen even from outside the Disney Park though is, Disneyland’s Matterhorn.  This thrill ride at the Happiest Place on Earth is a Disneyland guest favorite.

Located in Fantasyland when you walk through Sleeping Beauty’s Castle and off to the right, one of the most eye-catching features of Disneyland is Matterhorn Mountain.  It is a replica of the real Matterhorn in Zermatt, Switzerland with a twist.  Many guests daily grab a FASTPASS to ride the Matterhorn attraction to catch a glimpse of the abominable snowman, the yeti.  The ride vehicles slowly takes you up the Matterhorn and races you down the mountain as if you were an Olympic bobsledder.

The Matterhorn attraction opened up in 1959, only a few short years after Original Disneyland’s opening day.  Since then, Disneyland has tried to keep its guests eyes focused on the coaster and inside the park instead of what lies beyond.  Disney magic helps give us an escape from what lies beyond and into our happiest place.

In a very rare occasion, Disneyland Resort Photographer, Joshua Sudock has shared a #DisneyMagicMoment photo of Disneyland’s Matterhorn with its surrounding San Gabriel Mountains.  In 2019, Southern California has an extremely rainy season.  It is known for its sunny and 75 degrees weather most of the year.  With an abnormal rainy season early in the year, it brought more snow than normal to the San Gabriel Mountains and Joshua was curious to see what it looked like all together with Matterhorn.

How he took this photo is nothing short of a mixture of art and science.  To capture this photo, he went over to Disney California Adventure.  He needed the height for camera vision so he jumped on the Pixar Pal-A-Round Gondola.  With Matterhorn still in focus, he was able to snap a gorgeous shot of the mountain range.  Like he says, “If you didn’t know better, you may not even realize this is a photo of Disneyland!”

In another #DisneyMagic Moment, a Walt Disney World Photographer shared a moment he got to capture of the Shanghai Disneyland Clocktower.  Aulani and Disneyland recently shared some live photo scenes for an amazing background at home.  Some of the most stunning Disney Park photos come when the Parks are empty.