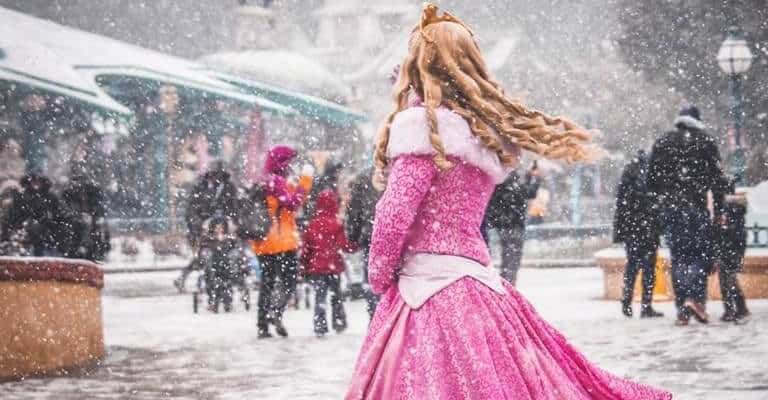 Disney parks are already magical, but have you ever wondered what it would be like to be in a Disney park when it snowed? Well, guests visiting Disneyland Paris have a chance to know what it’s like.

Now, it’s not Elsa’s fault. Disneyland Paris is actually one of the two Disney parks around the world north enough to get snow. The most recent snowfall at the time of the article was a little over a year ago, January 22, 2019.

Here are some of those magical pictures:

Related: Take a snowy ride on Big Thunder Mountain at Disneyland Paris in this POV video

Where And When Do I Have A Chance To See Snow At Disney?

If you’re looking to see snowfall at a Disney Park, you’re guaranteed to see it happen at Christmastime. But that’s the fake stuff. The only Disney parks on record for receiving real snow are Disneyland Paris and Tokyo Disneyland. Actually, Tokyo Disneyland was the first Disney Park worldwide to receive snow in 1983. That is where this Christmas Card picture was taken.

Shanghai Disney is also at a latitude where it could snow in the winter. However, it is very rare to get snow. The same situation applies to Tokyo. It can happen, but it’s very rare. Your best bet would be Disneyland Paris.

A snow-covered Disneyland park is a sight to behold, but there are some realities we have to take into account. Most of the outdoor sections of the park can, essentially, shut down. Parades can be canceled. Outdoor rides can close and character meet n’ greets can be postponed. All of these occurrences have been reported by guests visiting the snowy Disneyland.

But you will still see some of the Disney characters having fun outside. Beyond the magical interactions in the pictures above, guests have also reported seeing Peter Pan throwing snowballs.

Visiting Disneyland Paris in the winter is a different experience requiring different expectations. You will not get the normal Disney experience. You will not be able to do as much as you’re used to doing. But the trade-off is that you will get to see a sight few Disniacs around the world will ever get to see with their own eyes: A Magic Kingdom covered in real snow.

Have you ever been to Disneyland Paris or Tokyo Disneyland when it was snowing? How did the Cast Members react? What advice would you give someone looking to try and see snow at a Disney park either this year or next year? Let us know in the comments!