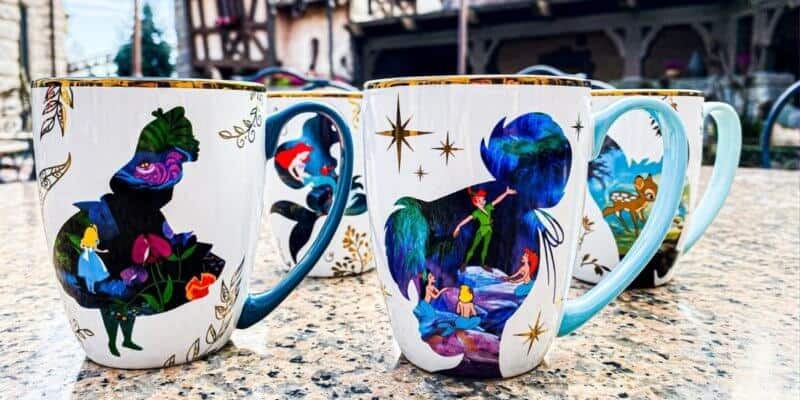 If you are looking for another new Disney coffee mug to add to your China Cabinet, then you’re in luck.

Disneyland Paris just posted this stunning photo of brand new Disneyland Paris coffee mugs that have arrived in the parks with the caption: “Fancy sipping a winter warmer out of your very own Disneyland Paris mug? It’s the perfect way of making the festivities last even longer in the company of your Disney faves!”

Fancy sipping a winter warmer out of your very own Disneyland Paris mug? It’s the perfect way of making the festivities last even longer in the company of your Disney faves! ??

From the looks of it, it seems there are four stunning coffee mugs, each representing some of the Disney Classics — Peter Pan, Alice in Wonderland, The Little Mermaid, and Bambi.

The Peter Pan mug features a silhouette of Tinkerbell with the scene of Peter Pan talking to the mermaids at Mermaid Lagoon from the film. And if you look closely, you will notice a bit of pixie dust around the silhouette.

The Alice in Wonderland mug features a silhouette of Alice and within you’ll see the scene of Alice talking to the flowers from the film. Surrounding the silhouette are gorgeous golden branches.

Next up is a coffee mug based on The Little Mermaid. The main silhouette is of Ariel and within the silhouette is the scene of Ariel from when she sings the famous “Part of Your World” song. Beautiful gold branches are also featured throughout the mug.

And lastly, a Bambi coffee mug, featuring a silhouette of Bambi with a scene from the film. The coffee mug also includes gold branches as accents.

Personally, I find these new Disneyland Paris coffee mugs absolutely stunning and I hope they become available on shopDisney.com soon!

What do you think of the new Disneyland Paris coffee mugs? Let us know in the comments.