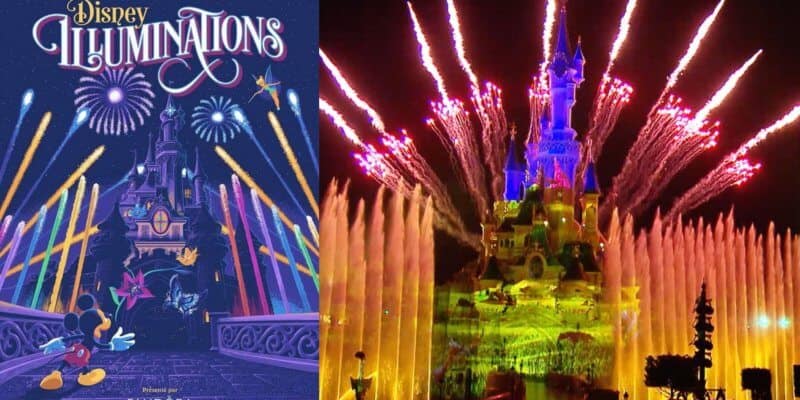 The full pre-recorded special can be seen below and offers viewers incredible angles of the enchanting spectacle, which features special effects, whimsical animated projections, and show-stopping fireworks all over and on Sleeping Beauty Castle.

This showing of the Disney Illuminations fireworks showing and last week’s Happily Ever After are both part of Disney’s #DisneyMagicMoments Campaign: A social media initiative dedicated to spreading magical moments to all of the Disney fans stuck at home during the current crisis.

For those not familiar with Disney Illuminations, the show first premiered at Disneyland Paris to celebrate the 25th anniversary of the park and replaced Disney Dreams! The show is the basis of Ignite the Dream at Shanghai Disneyland Park and includes water fountains, fire, music, lasers, searchlights, mist screens and many other special effects.

Music featured during the show comes from an array of some of Disney’s most famous films. Some of which, include: Real Gone (Cars), Circle of Life (The Lion King), Can You Feel The Love Tonight (The Lion King), Part of Your World (The Little Mermaid), Into the Unknown (Frozen 2), He’s a Pirate (Pirates of the Caribbean), A Dream is a Wish Your Heart Makes (Cinderella) and many more beloved Disney songs.

In addition to these two special showings, the #DisneyMagicMoments initiative also includes a recently launched website that’s free for all users. DisneyMagicMoments.com allows users to experience Disney, Pixar, Star Wars, Marvel, and National Geographic with stories, videos, and activities to inspire imagination and discovery among kids, fans, and families alike.

What are your thoughts on this remarkable display from Disneyland Paris? Let us know in the comments!