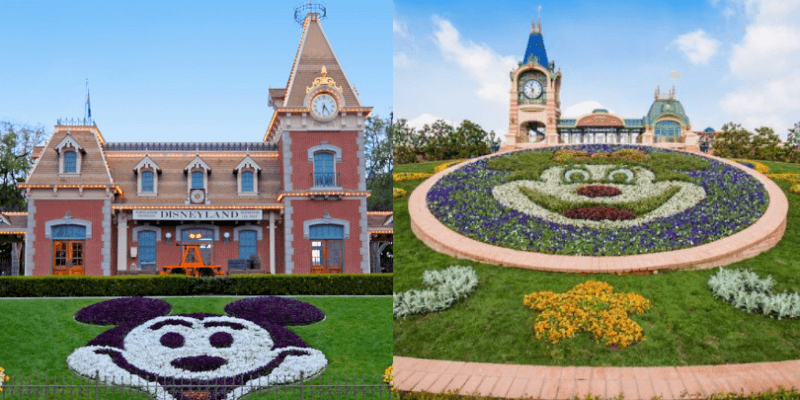 Well it started with a mouse so why not start each of the six Disney parks with Mickey Mouse, a floral Mickey. Each of the Disney Resorts have one, most of which is a a part of the railroad station that takes you around the parks. These floral Mickeys have become an iconic staple that is one of the most photographed scenes in the world.

Throughout the year guests look forward to seeing the floral Mickeys change for the seasons and events. You can always count on a line waiting to take their bucket list, Instagram worthy photo. And it almost didn’t happen. A week before Disneyland opened in 1955, the florals were not planted yet, but lucky for us it was planted in time and has been a staple ever since.

Landscaping has been one of Disney Parks’ most prominent features. Walt Disney put a lot of emphasis on the greenery and florals in Disneyland to bring a certain sense of elegance and realism to the parks. “To achieve the right effect,” Walt said, “our Disneyland landscape architects combined their talents with those of builders and maintenance personnel and created a believable and authentic scene of nature’s own design.”

To match the Victorian style of Disneyland Resort in Anaheim, there was shrubbery picked out to match.  It has remained the same throughout all these years.  As you walk through the park, you can see that some of the plants are indeed edible plants as well.  I mean there’s even Minnie Mouse ears that are peonies, which you can very often see inside the Disney parks.

The original happy Mickey face brings a sense of nostalgia as soon as you walk through the gates.  You see everything that Mickey Mouse stands for. Walt Disney put in so much imagination and hard work to make Disney Parks possible.  Though he was only able to see this one come to be, the floral Mickey Mouse at each of the Disney Parks entrances symbolizes the foundation in which these theme parks were built upon.

Walt Disney began the planning of Walt Disney World quite a few years before it actually was built.  Disney World has the most parks out of all the Disney Resorts.  The floral Mickey is in front of the railroad station just as it is at Disneyland Anaheim.  This one leads into the Magic Kingdom, both of which leads to a straight line view of the park’s castle. Greenery is so prominent at Walt Disney World that Epcot even has a Flower & Garden Festival every year!

If this floral Mickey and its railroad station looks oddly familiar, it’s because it’s modeled after the original at Disneyland Anaheim!  Actually, the entire park’s layout is modeled after the original expect on a smaller scale.  Hong Kong Disneyland’s Carnivale of Stars is a springtime celebration that is heavily floral emphasis from the characters’ costumes to its activities.

Though this Disneyland seems to have a railroad station attached to its floral Mickey entrance, this railroad station has no railroad!  That’s correct, it is the only Disney park that has no railroad.  Though we know that Walt Disney had a fascination with railroads, we are not sure why it’s absent in this Disney park.  Maybe there one day will be one, until then, we’ll keep a lookout for the train schedule and be there when the train arrives.

What do the Entrances Signify

It signifies whatever you want it to!  That’s the magic of Disney Parks.  When you see the floral Mickey, it signifies that you’ve made it to the Happiest Place on Earth.  It’s the happiest place on earth because you get to enter through for a day or, however long you’re in the parks for, and spend time with family, soak up magic, escape from reality, or all of the above.  As you enter through the tunnel under the railroad station, you see a sign that says, “Here you leave today and enter the world of yesterday, tomorrow, and fantasy.”