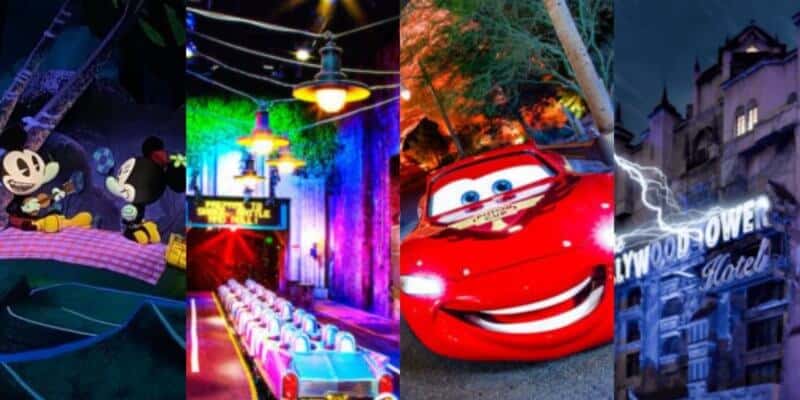 On April 1, legendary Disney Imagineer Kevin Rafferty officially ended his 42-year career with Disney after creating a variety of epic lands and attractions that keep Guests smiling with magic from coast to coast.

Considering Rafferty began his career washing dishes at the Plaza Inn at Disneyland, it is amazing to see it come full circle, as he exits while at the top of his Imagineering game.

Kevin Rafferty had his hand in the creation of so many iconic attractions and areas in Disney Parks such as Cars Land, Toy Story Midway Mania!, Test Track, Rock ‘n’ Roller Coaster Starring Aerosmith, The Twilight Zone Tower of Terror, Mickey’s PhilharMagic, Finding Nemo Submarine Voyage, Mickey and Minnie’s Runaway Railway, and so many more.

After any Disney fan reads a list of attractions that long and knows there are plenty more to go, a question might instantly come to mind — “So which one do you like the most?”

I would imagine that for any Imagineer, answering this question is a tough one, especially considering how much Walt Disney Imagineering spends dedicated to each project at the Disney Parks.

Well, in the most recent D23 podcast, “D23 Inside Disney Episode 81 | Disney Imagineer Kevin Rafferty on his Epic Career,” we get to find out exactly what attraction Rafferty liked best.

Interestingly enough, Rafferty is not such a thrill seeker. He explained, “I am not a coaster aficionado. I like happy friendly colorful attractions that have songs in them. I like movies that make you feel good at the end and everybody is ok, and that’s the kind of attraction I like.”

From this, it is easy to rule out attractions such as the Tower of Terror, considering that ride is a lot scarier than it is happy.

For Kevin Rafferty, the main goal is that he wants people to end an attraction with a smile. But even with that knowledge in mind, there are still plenty of attractions that Kevin can pick from if we are looking for his favorite. When asked about the favorite project he worked on, he replied:

“That’s a tough question. I think it’s between two: Radiator Springs, and Mickey and Minnie’s Runaway Railway. But if you say right now, and I can change my mind tomorrow, right now I think my favorite one is the last one that I helped bring to life, and that of course is Mickey and Minnie’s Runaway Railway. It’s about the color, the magic, the music, and the spectacle, and the happiness, the showman ship, and the three dimensional aspect of it. It really delivers on how good story telling holds you in the spell of that story, even though you know that it is characters, and you know it’s make belive, our job as Imagineer’s is to make make-belive veliceable. And I think that one really does it.”

Mickey and Minnie’s Runaway Railway can be found at Disney’s Hollywood Studios inside the Chinese Theater. The attraction replaced The Great Movie Ride and lets Guests go on a trackless adventure with Mickey Mouse and Minnie Mouse. Inside, you can actually see a small homage to Rafferty in the city scene!

On the bottom right of the construction block, you can see that there is a sticker that reads “Rafferty’s Road Blocks”. Aside from that being a true statement in terms of the object in which the sticker is placed, it and has a second meaning that pokes fun at all of the roadblocks that Rafferty had to overcome to bring this attraction to the finish line.

Rafferty is an Imagineer that has led his career with positivity, and it is fantastic to see that that is how he is choosing to leave it. When Disney announced his retirement, Rafferty answered a question that I think many Disney fans typically love to hear. It is a testament to the way he looked at creating attractions.

D23 interviewed Rafferty and said, “What advice do you have for young or aspiring Imagineers?” Kevin’s response was perfect:

“Wow, that’s a great question. Well, never take it for granted. And realize the value and importance of what it means to be an Imagineer. There are people who can’t sleep the night before they go to a Disney park because they’re so excited. There are a lot of jobs in the world, but really, how many Imagineers are there? They’re just a drop of water in an ocean of careers. And that’s very important.

Walt said ‘Disneyland will never be completed as long as there is imagination left in the world’—which is spread throughout the entire world now with many, many more parks. It’s our responsibility and honor and privilege to continue that legacy. It’s not just a job. It means a lot of work and it means having a lot of faith in yourself. It means stepping off the edge sometimes, and it means being a bit brave and being bold and responsible at the same time.

But mostly it’s about putting everything you have into creating nothing less than excellent, because that’s what our park guests deserve. You’re not going to make magic if you’re just sitting around doing nothing, man. You have to do the work. You have to. And it is a lot of work. And it’s challenging. It’s the toughest job you’ll ever love. How many people get to make a living making things that make people happy? That’s pretty special.

So, to any young Imagineer, I would tell them, ‘You are absolutely here for a reason. It’s no coincidence. You’re here. Now get to work. Make the magic. Make people happy. And don’t you ever, ever take a day of it for granted.’”

Knowing how much Rafferty loved his job, and how seriously he took every Guest’s experience at all Disney theme parks truly shows why he was such a successful and beloved Imagineer. Although we are sad to say goodbye, we luckily can continue to remember Rafferty’s work through his countless creations.

Which Kevin Rafferty attraction is your favorite?