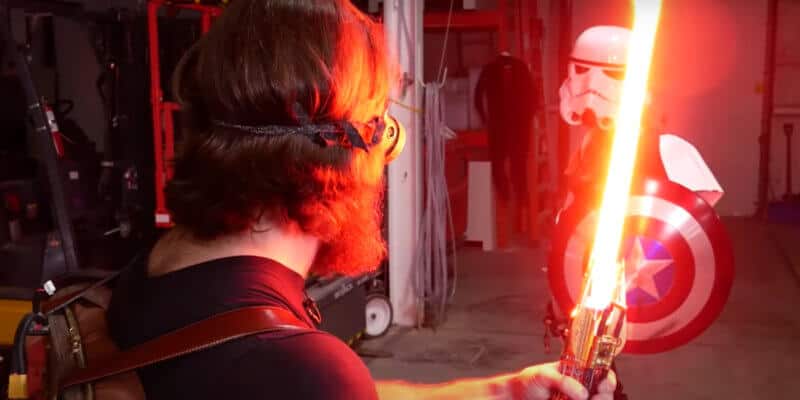 If you’re a Star Wars fan, there have probably been at least a few times in your life when you’ve really wished you had a functional lightsaber.

You’re not alone — in fact, some fans have taken matters into their own hands and created amazing lightsabers that have gone viral on social media. The TikTok hashtag #lightsaber currently has nearly two billion views and some of the fan-made Star Wars weapons are insanely impressive.

Former engineer James Hobson’s famous retractable Hacksmith Industries lightsaber has been featured on the Guinness World Records TikTok account. In the video, Hobson showcases his blade slicing cleanly through a blade of titanium, not unlike how Jedi Master Qui-Gon Jinn (Liam Neeson) uses his lightsaber his way through a metal door in the well-known Star Wars: Episode I – The Phantom Menace (1999) scene.

TikTok user lightsabers101 regularly shares videos of Star Wars blades he customizes. Here, he explained how he added one-of-a-kind features to a $550 lightsaber. He noted that he can “change the color of the blade by rotating the saber” and use software to “change color, sounds, blade effects, and anything else you could think of.”

You know you’ve always wanted to wield a purple-bladed lightsaber against Darth Sidious, just like Jedi Mace Windu (Samuel L. Jackson) in Star Wars: Episode III – Revenge of the Sith (2005) — with a blade like this, your Star Wars dream can become a reality.

A lot more customization than you think #starwars #fyp

Another account, lukes_lightsabers, showcased the difference between Disney’s Star Wars: Galaxy’s Edge lightsabers — more on those in a bit — the fan-made Neopixel lightsaber styles.

Polygon noted some of the major differences between Disney’s lightsabers and models that use Neopixel blades:

Many fan-made hilts use a light from a company called Neopixel. These lightsabers glow brighter, with a more saturated color, than Disney’s $200 lightsabers. They also flicker like the lightsabers shown in the movies. Disney’s will light up in little sections, whereas the light from the Neopixel looks like it just flows out from the hilt. Neopixel models will respond more quickly with sounds, whereas the Disney one lags a bit.

Of course, these details come with a price tag. A Neopixel lightsaber modeled after Kylo Ren’s weapon sells for $465.97 on Padawan Outpost,

Related: The Force Is Strong With This Lightsaber Churro!

Some would undoubtedly argue, though, that this fan-made version is even more impressive than the officially licensed product.

I don’t know about you, but I’m pretty sure Jon Favreau and Dave Filoni are missing out by not hiring these guys for The Mandalorian saga — just imagine Grogu with his very own tiny lightsaber.

Build your own lightsaber at Disney World or Disneyland.

If you would rather let Disney do the heavy lifting, you can construct your very lightsaber at Savi’s Workshop next time you visit Batuu at Disney’s Hollywood Studios theme park or Disneyland Park.

Remember, at this time, Star Wars: Galaxy’s Edge at Disneyland remains closed. You can, however, book an appointment at Disney World — but, Disney’s Hollywood Studios currently has no Disney Park Pass availability until mid-April.

The official description of the lightsaber building experience reads:

Have you been inspired to build your own lightsaber?

Comments Off on Amazing Lightsaber Videos Have Over a BILLION Views