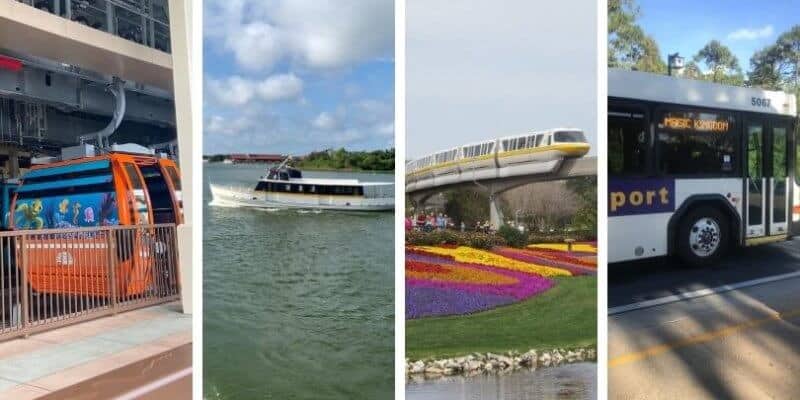 The Skyliner, Disney World buses, the Friendship boats, and even Disney’s Monorail — There are so many modes of transportation offered to Guests staying at Walt Disney World Resort so they can easily get from their Resort hotels to the theme parks or Disney Springs.

But, with so many different transportation options, sometimes it can be difficult to determine which is the fastest and which is the best route to go when trying to get to your preferred destination.

Well, we decided to put together a transportation guide to help give you the best tips, tricks, and advice when visiting the Most Magical Place on Earth.

Whether you are trying to get to one of the four theme parks — Magic Kingdom, EPCOT, Disney’s Hollywood Studios, or Disney’s Animal Kingdom — one of the two water parks — Blizzard Beach or Typhoon Lagoon (currently closed due to the pandemic) — Disney Springs or even one of the other Disney World Resort hotels, we’ve got you covered on which mode of transportation you should take.

However, the new mode of transportation, though the ride itself only a few minutes, the lines to board the Skyliner are often quite long. In fact, the Skyliner draws in tons of Guests, especially near park open and park close, can build up.

So, how long do Guests wait really for this mode of transportation? Well, even though the lines can really build up — It constantly moves and Guests do not have to stand still while waiting for a bus or boat. The Skyliner ride itself is only a few minutes, so add that to a worse-case-scenario of 45-minutes of waiting in line, your total time would be 50-minutes. But if the line is not 45-minutes (I, personally, have never waited longer than 30-minutes on the Skyliner line), you would spend a lot less time utilizing this mode of transportation.

The Disney World buses run from all of the Resorts on property to the various theme parks, water parks, and Disney Springs. However, with the new Skyliner option to Guests staying at Disney’s Pop Century Resort, Disney’s Art of Animation Resort, Disney’s Riveria Resort, and Disney’s Caribbean Beach Resort, the buses do not run from these Resorts to certain theme parks.

Walt Disney World tends to let Guests know it could take up to 20 minutes between buses. However, I have waited significantly longer on multiple occasions. With that being said, I have also waited much less than 20 minutes on other occasions. Personally, I find the buses to be unreliable (when it comes to time).

Additionally, the length of time spent on the actual Disney bus can vary depending on where you are headed and where you are coming from. For example, a bus ride from the All-Star Resorts to Magic Kingdom can take up to 20-25 minutes whereas a bus ride from Disney’s Port Orleans Resort to Disney Springs is closer to 10 minutes.

It also depends on the time of day you are trying to catch a bus. If you are trying to get to a theme park for opening, you need to consider the fact that a majority of other Guests are trying to do the same, meaning the line for buses in the early morning will be much longer than if you go mid-day. (And the same goes for park closing.)

Overall, though the buses can be very convenient, waiting for a bus and the actual length of the bus ride itself can take a decent amount of time.

The Express monorail does not make any stops and takes Guests between the Transportation and Ticket Center and Magic Kingdom. This ride only takes about 10 minutes, however, much like the other transportation options, if you just miss a monorail you could be waiting another 10 minutes before the next one arrives.

The EPCOT monorail, though not currently operating, also transports Guests to and from the Transportation and Ticket Center. It offers an express round-trip service to EPCOT and takes about 15 minutes total.

Walt Disney World has a few different boat transportation options, including the Friendship boats that run around the EPCOT and Disney’s Hollywood Studios area, the Ferry Boat that runs from Magic Kingdom to the Ticket and Transporation Center, as well as the boats that run from the Magic Kingdom Resorts to Magic Kingdom.

The friendship boat system runs from the EPCOT Resorts to and from both EPCOT and Disney’s Hollywood Studios. The signs posted inform Guests that it could take up to 15 minutes for the next boat to arrive, so if you just miss one of the boats, you could be waiting 15-20 minutes for the next.

With that being said, on top of the ride itself (depending on where you are going it could be another 15-20 minutes due to other stops the boat may have to make), it is important to keep in mind you could be traveling up to a total of 45 minutes on a friendship boat. In most cases, Guests are not spending 45 minutes utilizing this mode of transportation but it is important to keep in mind.

The ferry ride that runs across Seven Seas Lagoon from the Transportation and Ticket Center to Magic Kingdom takes about 10 minutes total. However, it is important to keep in mind that Guests should allow a bit of extra time spent waiting to the ferry as well as boarding and unloading the ferry boat on both sides.

With this being said, this mode of transportation could take as little as 10-15 minutes but could also take as long as half-an-hour depending on how many Guests are aboard and loading/unloading, as well as if you just miss the ferry boat or not.

As mentioned above, there are other boats that go to and from Magic Kingdom and the nearby hotels — Disney’s Grand Floridian Resort and Spa, Disney’s Wilderness Lodge, Disney’s Fort Wilderness Campground, and Disney’s Polynesian Resort.

Most boat routes around Magic Kingdom run on 15 to 30 minute intervals. With this being said, you have to also allocate for the actual boat ride itself, which can be up to 15 minutes. If, for example, you just miss a boat at Fort Wilderness or Wilderness Lodge and you have to wait 30 minutes for the next boat, plus a 15 minute ride, you could be traveling for a total of 45 minutes.

What’s the Quickest Mode of Transportation?

Well, really this is a loaded question. If we are talking about the amount of time while aboard the actual mode of transportation, I would say either the monorail (especially if you are at Disney’s Grand Floridian Resort and are trying to go to Magic Kingdom) or the Skyliner. But if we are talking about including the amount of time it takes to wait for your transportation to ride as well, it really depends. If you are lucky and you catch the bus or boat right as it arrives, then they could be quicker than standing in a 25 minute line for the Skyliner.

But, on the other hand, if you just miss the boat or bus and you have to wait 20 minutes, plus take a 20 minute ride to your destination, then it will take longer than if you hopped on the monorail or Skyliner.

Was this transportation guide helpful? What do you think is the quickest mode of transportation? Let us know in the comments below.

If you need help planning your Disney World vacation, get in touch with our friends at Academy Travel. Start planning with a free quote today!