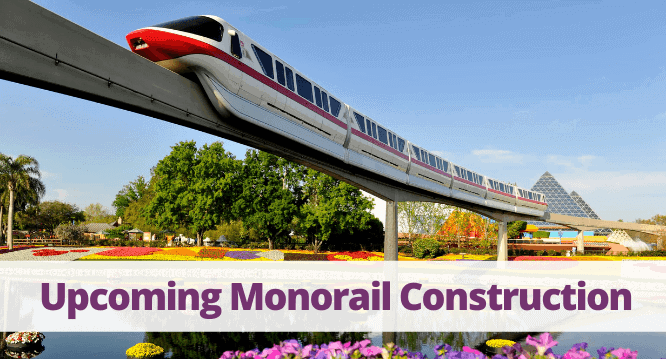 If you’re handy with electronics and motors, you might know a lot about the inner workings of Walt Disney World’s Monorail system. Connecting the TTC to Magic Kingdom as well as a loop of Disney Resorts Hotels, the “main” Monorail line around Seven Seas Lagoon is one of the treasured modes of transportation for Disney Guests.

Unearthed permits show that upcoming monorail construction is due for at least four of the “stops” on the Magic Kingdom Monorail Line.

The Ticket and Transportation Center, or the TTC, as many Disney Guests know it, is one of the stops the Monorail makes before arriving at Magic Kingdom. Our first permit shows that construction is due to replace what’s called a contactor at the TTC. If you don’t know what this piece of equipment is, a “Contactor is an electrical control switch [similar to] a relay. It is used for switching the current to ON and OFF a circuit. Contactors won’t provide protection against overload protection. [They are] used to control the heating circuits, electric motor, and automated industrial equipment.”

Moving down the monorail line, we see that another permit was filed for the same contactor replacement at the Disney’s Contemporary Resort. It’s worth noting that all of these permits were approved at the same time, on September 23rd, around 2pm in the afternoon.

Disney’s Grand Floridian Resort & Spa is also on the same line, with another monorail contactor replacement permit. It seems as if all the contactors are due for replacement at the Resort Hotels.

Not to be forgotten, Disney’s Polynesian Resort’s monorail contactor is in need of replacement, too. The last permit for the Monorail line can be found here. Don’t forget to check out the additional upcoming construction at “The Poly,” as we call it, regarding the Moana refresh and other projects.

All monorail contactor construction is announced within the permits to be done by Tri-City Electrical Contractors, Inc and can be completed within a year’s time. Electricity is something you want left to the trained professionals!

Do you take the Monorail when you visit Walt Disney World Resort? Leave us a comment with your favorite color line!