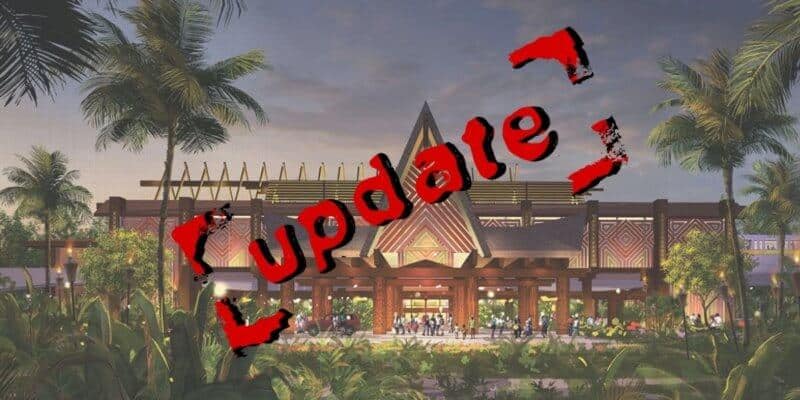 It wasn’t long ago Inside the Magic reported that Disney’s Polynesian Resort and Spa would be renovating its resort and bringing us amazing Moana themed rooms.

According an Orlando Sentinel report regarding the upcoming closure, a Disney spokesperson said:

…changes to the rooms will include a move to a Pacific Ocean-inspired color palette as well as details, patterns and textures from Disney’s “Moana,” an animated film that takes place on the Polynesian island of Motunui.

Disney Travel Agents were also sent an email regarding the upcoming Polynesian resort closure, which reads:

“As we continue to reopen additional Disney Resort hotels to Guests, we are modifying the reopening date for Disney’s Polynesian Village Resort which will reopen next summer. This schedule adjustment also allows us to complete some refurbishment work at the Resort hotel, including enhancements to the Great Ceremonial House and Guest rooms. We expect work to begin in early October and look forward to sharing more about these changes in the future. The Villas and Bungalows at Disney’s Polynesian Village Resort will remain open during this refurbishment.”

Now, we have some more details surrounding the Polynesian overhaul thanks to Disney Parks Blog, including concept art which is shown above and below. The first thing they announced is a new porte cochere, which will showcase the 20th century architecture the Polynesian is famous for, along with a new bold façade, a new monorail station and more!

Disney also announced that the new overhaul would debut just in time for the resort hotel’s 50th anniversary! They write:

One of the biggest changes will greet you right up front – a new porte cochere will showcase the iconic mid-20th century architecture the Polynesian is famous for. Our team from Walt Disney Imagineering and Walt Disney World have crafted a design inspired by colors, patterns and textures found throughout the resort.  This new entry features a high-pitched, open-truss roof covered in a thatch style. There’s also a bold façade that features pops of color complementing the Longhouses found throughout the resort. Along the Monorail station, bold new wooden screens will be covered with geometric patterns in bright, tropical colors that complete an exciting new composition that will greet you when you arrive.

Enhancements will also be made to the lush gardens and fountains that have welcomed guests to the resort since opening day.

The open and airy design of the entryway will feature dramatic lighting elements, including beautiful chandeliers inspired by glass floats, fishing nets and oversized bamboo elements. The new chandeliers will match the existing grand chandelier in the resort lobby, artfully bridging interior and exterior spaces.

While the construction and overhaul is underway, Guests will still be able to access the Great Ceremonial House and its operating dining and retail outlets, including Kona Cafe and Pineapple Lanai if you are craving a Dole Whip! Disney Parks Blog shares:

While work is underway over the coming months, guests can still enjoy access to the Great Ceremonial House and its operating dining and retail outlets.

The new arrival experience is just the beginning of what guests will discover when the resort reopens in summer 2021. All of the resort’s guest rooms are being beautifully redone too. We look forward to sharing more details about Disney’s Polynesian Village Resort as they become available. Keep checking back to the Disney Parks Blog and Instagram @thezachriddley for more information on this exciting design.

Keep in mind, Disney announced Disney’s Polynesian Resort would remain closed through summer 2021 for this overhaul.

Stay tuned to Inside the Magic as we get more information on the Polynesian overhaul at Walt Disney World.

Are you excited for the overhaul at Disney’s Polynesian Resort and Spa? Let us know in the comments below.

If you want to visit Walt Disney World and need helping planning the vacation of your dreams, don’t hesitate to reach out to our friends, the Authorized Disney Vacation Planners at Academy Travel, for a free quote.

Comments Off on More Details Revealed For Disney’s Polynesian Overhaul