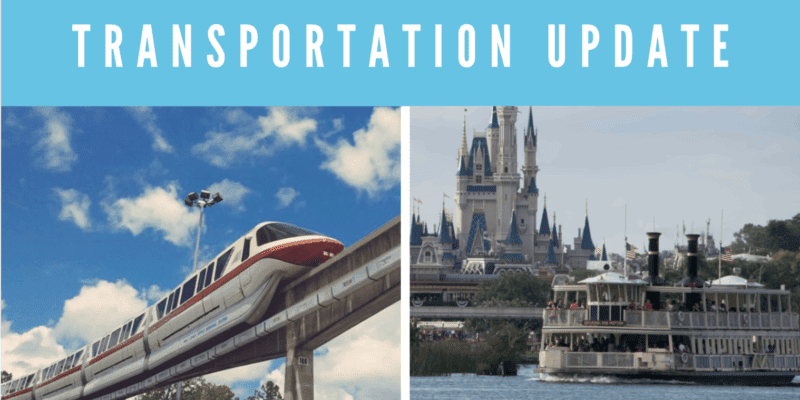 Today marks the first time Guests have entered Walt Disney World Resort since the theme park temporarily closed on March 20. Magic Kingdom and Animal Kingdom are offering their AP Preview today and we’ve got all the details!

One question many Disney Park fans have had is how social distancing would be enforced on Disney World’s transportation options, including the Monorail and the Bay Lake ferry boat.

We’re on the ground at Magic Kingdom and have taken both forms of transportation to bring you photos of the physical distancing measures that Disney has taken to keep Guests safe as they travel around the Walt Disney World Resort complex.

This morning, there were two Monorail lines for Guests to practice physical distancing while they waited to board. Here, you can see that ropes have been hung to separate each party by the requisite six-foot distance.

Once Disney World Passholders reached the Monorail boarding area today, they were asked to stand on numbered circles with only the members of their party. This allowed Cast Members to ensure that all parties remained separate onboard the elevated train.

Only one party per Monorail cabin was allowed, ensuring that mingling between Guests did not occur during the ride to Magic Kingdom park.

Walt Disney World Resort officials have also taken social distancing measures on the ferry boat. Green circles marked six-foot distances around the edge of the ferry. Benches were not available and were marked with tape that read “For Your Safety, Not Available.”

Once Disney World Guests exited the ferry to enjoy the AP Preview this morning, they also appeared to be doing a good job of walking apart from one another, maintaining the physical distancing protocols that Disney will be enforcing at all four theme parks: Magic Kingdom, Disney’s Animal Kingdom, EPCOT, and Disney’s Hollywood Studios.

What do you think about these Disney World transportation social distancing updates during the phased reopening? Tell us in the comments!

Comments Off on WDW Takes Social Distancing Precautions on Transportation