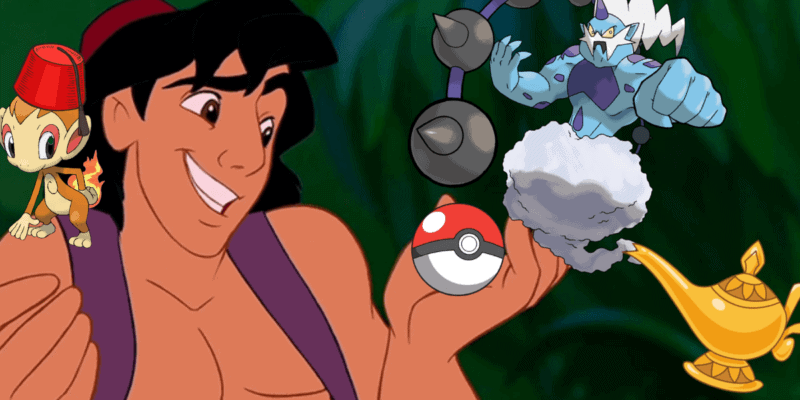 Pokemon x Disney is a match made in nerdy heaven!

If you’re a fan of both franchises, you might have thought about what kind of Pocket Monster your favorite Disney character might use.

As a reminder, each Pokemon trainer gets a team of six. We’re going to be using both the anime and the games as our basis. Each team will be based on the character‘s thematic backstory or physical characters they interact with. So Mulan could have a Salamence to signify Mushu or Machamp as a representation of the song Make a Man Out of You.

Let’s start things off with an iconic Disney movie: Aladdin. First up is his trust sidekick, Abu, as represented by the fire type monkey Chimchar!

Secondly, we’ll add Copperajah, a new Pokemon from the Galar region which reflects Abu’s elephant form. Of course, we need to have Thundurus, the legendary genie Pokemon to represent Robin Williams’ Genie.

Then we’ve got Rajah the tiger as represented by Torracat, the fire type starter from the Alola region as well as Arbok to represent Jafar’s snake form. We round out this awesome team with a pretty on the nose pick. Lampent reflects the lamp; an iconic part of an iconic Disney movie.

Alice in Wonderland (Or, the Johto region)

The craziness of Wonderland opens up a lot of possibilities for cool Pokemon for Alice’s team. The March Hare is up first, portrayed here by Bunnelby, a normal type Pokemon from the Kalos region.

Caterpie obviously represents the Caterpillar (albeit without his iconic Hookah), and Hatenna joins the squad as the Mad Hatter (get it, it’s a hat?).

Pikachu‘s pre-evolved form Pichu represents the Door Mouse, and Perrserker represents the Cheshire Cat. The regal yet intimidating Gothitelle is our Queen of Hearts.

Ariel herself is represented by Primarina, a water/fairy type based on a siren with a mermaid’s tail! Her trusty sidekick Flounder is portrayed by Magikarp (but only when it’s shiny to get that yellow look!) and Scuttle the Seagull is represented by Pokemon Ruby and Sapphire‘s own Wingull.

The octopus Pokemon from the Johto region Octillery is our Ursula while her nefarious eels are portrayed by Elektross – an electric type Pokemon who actually has no type weaknesses! Finally, what would Ariel by without Sebastian, the crab?

Perhaps Daveen Diggs will be taking inspiration from the Kanto region and the original Japanese art of Pokemon Red and Green version, as Sebastien will join Ariel’s team as Krabby.

Andy’s toy box is full of exciting creatures that could easily fit into an anime episode. Dragon / Rock-type Tyrantrum represents Rex, Slinky is Herdier, Ham is Tepig, and Mudsdale is, of course, Bullseye!

However, when it comes to the stars of the show, we need to go a little more obscure. Buzz Lightyear, the Space Ranger from, well … space, is represented by legendary Pokemon Deoxys. As for Woody, there isn’t really a cowboy Pokemon, so we need to dig deeper!

The Hoenn arc of the Pokemon anime featured a pretty radical Meowth. Beforehand, we’d only really seen the talking Meowth that is part of Team Rocket. However, this Meowth was inspired by Puss in Boots as he wears super cool boots and a hat!

We’ll finish up our list of Disney Pokemon trainers with the star of The Princess and the Frog: Tiana. Prince Naveen will be represented by the frog Pokemon, Politoad (ok, he’s a toad but it’s close!). Tiana’s frog form is represented on her team by Frogadier.

Louis the Alligator is obviously Feraligatr (AKA the best Pokemon ever), and Ray is Volbeat. Not quite a firefly, but they’re known for their ability to use the move tail glow and fit the aesthetic just fine.

For the final two members of Tiana’s team we have Dr. Facilier as portrayed by the nefarious Darkrai; the shadow Pokemon. Finally, Charlotte is a dead ringer for Aromatisse in that pink dress!

So there you have it: our picks for the Pokemon teams of Disney characters. Pokemon is available to stream on Netflix in some territories, while all the above Disney movies can be found on Disney+.

Do you agree with our Pokemon x Disney picks? Let us know in the comments below.

Comments Off on Pokemon x Disney: What Teams Would Characters Have?