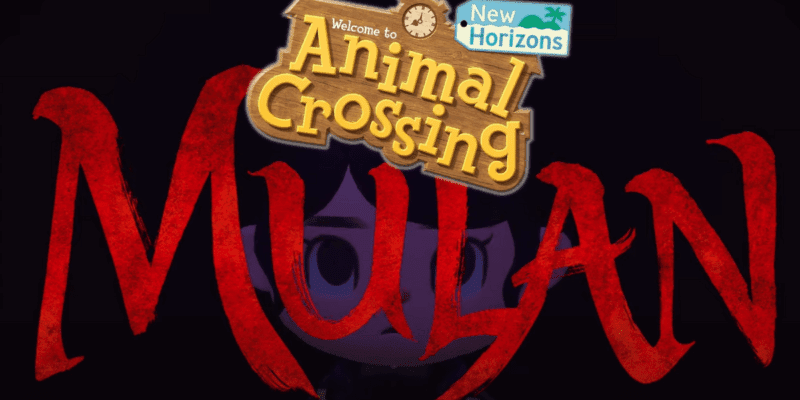 It seems like it’s been a while since we wrote about Animal Crossing: New Horizons. Thankfully, YouTuber ACNH Disney resort has sorted that right out by creating a sensational video that imagines Mulan in Animal Crossing!

The scene in question is ‘Mulan’s Decision’ – the moment where the titular hero decides to go off to war.

To see more Animal Crossing: New Horizons content, check out how this fan recreated Disneyland, while this fan turned their island into the Haunted Mansion!

The effort that must’ve gone into this video is just staggering. The creator has clearly taken a lot of time to reenact the classic Disney movie scene in great detail.

Check out the video right here!

It’s quite an achievement. Anyone who knows anything about Animal Crossing: New Horizons knows that finding all of the necessary items, hairstyles, and weather effects certainly isn’t easy! Pulling this all of this together along with the classic soundtrack from Mulan turns it into a real piece of art.

Mulan is a Disney classic

The video clearly uses the 1998 animated classic as its basis, as opposed to the grittier 2020 movie. To many fans in the comments, it’s a more authentic portrayal, and some are even saying they prefer it to the live-action remake!

Seeing Mulan the animated movie recreated in Animal Crossing: New Horizons is both cute and epic. We love how accurate the costumes and hairstyles are, and the little touches are both hilarious and impressive.

Also, props need to go to ACNH Disney Resort’s filmmaking. With just a Nintendo Switch and a good grasp of editing techniques, they’ve managed to turn one of the most serene video games ever created into an epic montage!

We LOVE seeing people’s Disney-fied Animal Crossing: New Horizons islands. If you’ve turned yours into a remake of Tarzan, or constructed your own Space Mountain – we want to see it!

What do you think of this “Mulan in Animal Crossing” video? Let us know in the comments below.