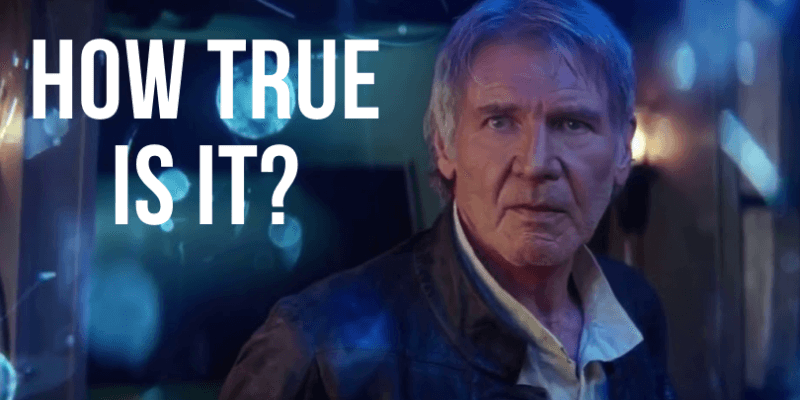 We’re sure you’ve heard a lot of noise about Disney resetting the Star Wars sequel trilogy. It’s something that has been rumored since Star Wars: Episode IX – The Rise of Skywalker (2019) premiered to less than stellar reviews.

In fact, we wrote an article highlighting the rumor way back in June of last year.

However, what are the facts? Where did this rumor come from and why has it persisted?

Resetting the Star Wars trilogy traces back to a YouTube video

As we mentioned in our initial article on the topic, the rumor about Disney resetting the sequel trilogy came from a YouTuber who goes by the name of Doomcock. He suggests that Disney may look to retcon or totally reboot Star Wars Episodes VII -IX: The Force Awakens, The Last Jedi, and The Rise of Skywalker. At the time the report began circulating online, the content creator claimed that an insider at Lucasfilm informed him that the Star Wars sequel trilogy was due to be “reset” due to the “massive problem on their hands”.

In his words, that “massive problem” was that “the Star Wars franchise is dead.” At that time, however, the fan response to The Mandalorian and the anticipation of OBI-WAN KENOBI: An Original Series and other upcoming Disney+ series had, perhaps, not been fully taken into account.

Last summer, we reported that Doomcock thought that a time-travel plot in Star Wars Rebels would be the catalyst for the sequel trilogy’s potential reversal. However, this obviously has not happened.

Then, this week, another rumor surfaced, indicating that the trilogy could be rebooted using Disney+ and archive footage of Carrie Fisher (Princess Leia), Mark Hamill (Luke Skywalker), and Harrison Ford (Han Solo).

None of these reports have been confirmed by Lucasfilm or Disney executives.

Related: George Lucas Would Reportedly Return to “Star Wars” If He Has Full Control

But, why would Disney reset the Star Wars sequel trilogy?

We’ve been fascinated by the speculation around Disney resetting the sequel trilogy. However, why do some Star Wars fans actively hope for this outcome? It’s mainly due to a perception that the films, particularly Star Wars: Episode VIII – The Last Jedi (2017), did not live up to fan expectations. Fans often cite Mark Hamill’s dismissal of the decisions made regarding Luke Skywalker‘s character in the Rian Johnson film as a primary reason for their distaste. Additionally, the rushed inclusion of Ian McDiarmid as Emperor Palpatine in The Rise of Skywalker also didn’t sit well.

But really, will Disney actually reset the trilogy? We’ve said before that it is incredibly unlikely and most fans seem to agree. According to one leaker, the idea is “preposterous”.

Speaking to Inverse, he said:

“There is nothing that makes me think anyone has any inkling of reworking the sequel trilogy. In fact, the idea is preposterous … Each of the sequel trilogy films is performing rather well for Disney/Lucasfilm financially. To ‘erase’ those would weaken a consistent revenue stream that is currently being capitalized on.”

Regardless of whether you think General Leia and Han Solo were written poorly or think John Boyega’s Finn was underused, nobody can deny that these films made a ton of money. And, at the end of the day, that is Disney and Lucasfilm’s top concern. It seems incredibly unlikely that the sequel trilogy will be reset, despite what some Star Wars fans might hope. Furthermore, we also reported that Carrie Fisher herself was allegedly happy with the creative decisions made.

However, it’s always interesting to hear another perspective and wonder, what if?

What do you think of the rumor? Let us know in the comments.