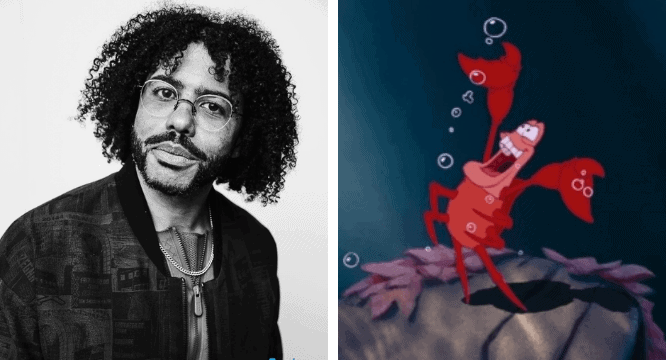 Dig in, fellow crustaceans! There are some flotsam and jetsam we want to share with you!

People Magazine sat (scuttled?) down with actor and rapper Daveed Diggs to discuss his lengthy process to prepare for playing Sebastian. Diggs will portray the Caribbean crab in the upcoming live-action/ CGI version of The Little Mermaid and has personally confirmed that Sebastian will indeed have a Caribbean accent.

Casting for the new The Little Mermaid ramped up in the last year or so, with nearly a full cast being announced by Disney. Seven roles — including Awkwafina as Scuttle, Halle Bailey as Ariel, Javier Bardem as King Triton, and Melissa McCarthy as Ursula — were debuted (in the social media post below) with character titles and recent snapshots.

Hamilton fans (knowing Diggs for his Layfayette and Thomas Jefferson) were enchanted with the choice.

People Magazine reports that Daveed Diggs, of Hamilton fame, dug down deeper for this role than any other that he has played:

“I worked harder on Sebastian probably than I have for any role in my life. It’s tricky,” Diggs told Collider. “… I tend to say yes to things when I feel like I can do it, but I’m actually not sure I’m the smart choice or the person naturally who should be doing it. That’s true of Sebastian, for a lot of ways that are uncomfortable.”

While Diggs admits he is not of Caribbean descent himself, he has been doing the legwork to research the culture and “immerse” himself.

Diggs spent an enormous amount of voice work with professionals Tony Hall and Chris Walker trying to get the nuances of Sebastian’s voice right. The actor reflects on his upcoming work saying that any dialect has consistency in both the region and the person, so keeping a speech pattern based on culture was important. He hopes his efforts will enable people to connect to his performance.

“I want somebody who is from Trinidad or from Jamaica, depending on where we landed with the role, to be able to see themselves in this, in some way,” Diggs said. “Even though maybe my voice doesn’t sound exactly right, I wanted to feel like somebody connected to it.”

Sebastian’s voice, initially created by actor Samuel E. Wright, is iconic in many Disney fans’ minds. Diggs inevitably feels the pressure to both honor the character and create his own lane, saying, “That role stressed me out quite a bit, but also is incredibly fun. Like I said, I did more research for that role than I have for any part ever — and I’m literally a crab!”

Are you excited to see The Little Mermaid in its new form? Let’s hope the movie… has legs! Leave us a comment below with your thoughts!