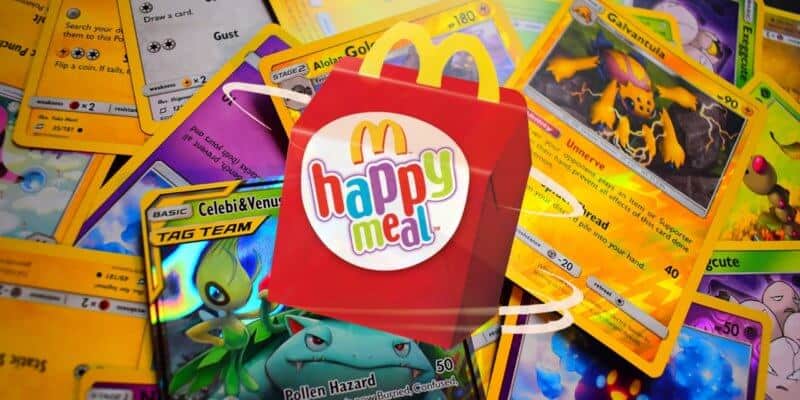 McDonald’s Happy Meals may be geared towards kids, but often enough, their toy collections have adults heading to the drive-thru.

However, it seems that this surprise was not yet ready to be announced. According to Comicbook.com, “An upcoming McDonald’s Happy Meal promotion celebrating Pokemon’s 25th anniversary has leaked early. Ads spotted at various local McDonald’s confirmed that the popular fast-food chain would start its Pokemon 25th anniversary celebration beginning on February 9th.”

The toys will be classic Pokemon trading cards, along with stickers. If you want a closer look, Twitter user PokeJungle (@pokejungle) posted one of the leaked McDonald’s Happy Meal displays.

It appears that the McDonald's Pokémon Happy Meal promotion has leaked and is expected to start in the US next month! pic.twitter.com/jNC6rCGwjJ

The choice for Nintendo to release Pokemon cards with a McDonald’s Happy Meal for their anniversary is a very smart move. Not only will they have adults who grew up playing Pokemon Red and Blue on their Game Boy lining up for a Happy Meal, but with the recent resurgence of Pokemon via Pokemon Go, as well as new games for the Nintendo Switch, Nintendo is passing along the fandom to a younger generation.

To add to that, Comicbook.com mentioned that the Pokemon Company is also releasing a slew of new games this year. Some game titles including New Pokemon Snap and Pokemon UNITE, as well as a rumored new set of Pokemon games, will be released later this year — possibly remakes of Pokemon Diamond and Pearl.

It seems Nintendo is going all-out for Pokemon‘s 25th anniversary with all the new releases on multiple marketing platforms.

Recently, McDonald’s also teamed up with Disney for their kid’s meals toys, producing a chain of collectibles that Disney Parks fans couldn’t wait to get their hands on. The full set included:

Nintendo is likely hoping for a similar reaction that Disney fans had when the gaming company releases the Pokemon Happy Meal toys. With the continuously growing fandom that has backed Pokemon for 25 years and counting, it seems that the Pokemon IP is continuing to dominate.

Now, with Universal’s theme park division implementing Super Nintendo World into a variety of theme parks including Universal Japan, Universal Studios Hollywood, and Universal Orlando’s not-yet-built Epic Universe, Pokemon could theoretically enter the theme park universe at any moment. For now, it seems the Super Mario games are what Nintendo is focusing on for Universal’s theme park lands, but as the Pokemon franchise remains popular, it would not be shocking to see Pokemon receive a land or attraction in a Universal theme park.

For now, Pokemon fans can get ready to break out their Pokemon trading cards as McDonald’s will shortly be releasing an added 25. From Charizard to Bulbasaur, you better get your Pokemon Trainer hat on and get ready for battle on February 9.

Will you be collecting Nintendo’s Pokemon Happy Meal cards once they are available?