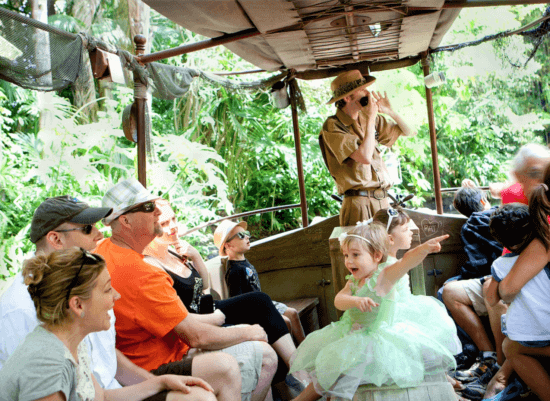 Walt Disney once said that Disneyland would never evolve and grow and the park would never be finished. That statement has proven to be quite accurate over the years.

Related: Everything You Need to Know About Disney’s Jungle Cruise Attraction

Most recently, Disney announced that the Jungle Cruise at Walt Disney World Resort and Disneyland Resort would undergo a slight reimagining.

We are constantly evaluating ways to enhance attractions and experiences in our parks. We want to make sure everybody has the best time—that guests from all over the world can connect with the stories we share and that how we bring those to life are respectful of the diverse world we live in. And when they get off the attraction, they know that we have done our homework because these are the details that matter. When you look at the Jungle Cruise, as it is today, there are just a couple of scenes that don’t do that and needed a refresh. But I want to make sure people know we are not changing the whole Jungle Cruise. This is not a re-envisioning of the entire attraction. It’s the Jungle Cruise you know and love, with the skippers still leading the way, and at the same time, we’re addressing the negative depictions of “natives.” So that’s one of the scenes we’re going to go in and change.

From this, it is clear that Disney is not changing the attraction as a whole but just a few of the scenes. There will still be skippers cracking jokes; however, the storyline will be slightly altered. The new storyline will follow a skipper and his passengers as their journey through the jungle go haywire!

As part of this story update, we’ll get to follow a skipper and his passengers as their journey goes awry. That’s right, for the first time ever, the skipper role will not only be that of a live, experienced and witty guide, but also represented by a show figure within the attraction itself. In fact, the expedition will be up a tree (literally!) after their sunken boat splits apart and chimps board the wreckage, with monkey business ensuing.

But that’s not even half of the hull story. Fans of the Jungle Cruise attraction may recall some boats that used to make their way around the river but haven’t been seen for a while — specifically the Mekong Maiden and the Kwango Kate. Ever wonder what happened to them? Well, you might go ape when you find out! Ultimately, the jungle gets the last laugh.

Although the attraction’s storyline still seems to fit the classic vibe of the Jungle Cruise in terms of lighthearted fun and adventure, some Disney fans are not excited to see the attraction undergo these changes — or any changes at all. Disney fan Logan Hatfield has started a petition on Change.org to “keep the old elements of the Jungle Cruise at Disneyland And Walt Disney World.”

The Disney parks have been removing alot of things since june of 2020 along with Splash Mountain for Jungle Cruise they plan on removing trader sam along with other old elements i think we should keep all the old elements for the jungle cruise at wdw and disneyland as it is unfair for us disney fans and childhood fans.

As Disney mentioned, many negative depictions of natives will be changed, which would therefore remove some of the characters within the ride, such as Trader Sam. For example, the classic “two heads for the price of one” joke will likely leave the attraction. Disney is moving in a different direction with the characters included in the Jungle Cruise ride at Disneyland Park and Magic Kingdom Park.

The petition’s creator also brings up the reimagining that Splash Mountain will undergo, which will rid the attraction of the racial Song of the South undertones and replace it with the Princess and the Frog IP. That being said, that retheme announcement was also met with mixed opinions within the Disney fan community. After a Disney fan started a petition to retheme Splash Mountain, and following Disney’s announcement of the Princess and the Frog changes coming soon, petitions were formed to change the mind of the Disney executives in charge of the call. However, it seems that these petitions were circulated online to no avail, as Disney plans to move forward with that change.

It is unlikely that this Disney fan’s petition will change Disney’s mind on the upcoming changes to Jungle Cruise since the attraction is not evolving. Still, instead, it is just becoming more inclusive for all audiences. That being said, most recently, a petition to bring Johnny Depp back into his role of Jack Sparrow in Pirates of the Caribbean went around, and Disney is now reportedly back in talks with Depp. Therefore, we can never underestimate the power of Disney fans.

It seems that Disney is inclined to get a move on in terms of the changes for Jungle Cruise at Disneyland and Disney World, as they announced it would be ready by the end of the year. The company is trying to tell diverse, inclusive stories at the theme parks, and these changes coming to the Jungle Cruise ride in 2021 are part of that. We currently do not have any refurbishment dates, but we will keep you updated on the attraction’s status as changes begin. For now, you can experience Jungle Cruise at Magic Kingdom (the Disneyland Resort theme parks are still temporarily closed).

More Information: Everything We Know About the New Jungle Cruise Retheme

Do you think that the Jungle Cruise changes are needed? Are you okay with the decision to change some scenes, or do you agree with the petition?