Will We Ever Solve the Yeti Mystery? Disney Fans Debate - Inside the Magic 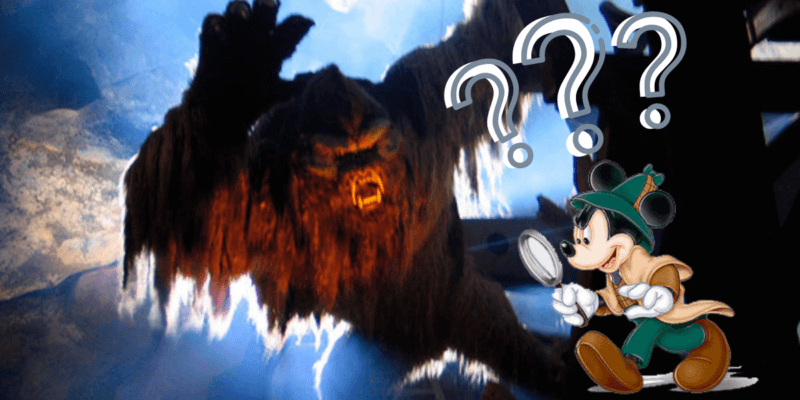 Do your eyes ever deceive you? Disney is the master of optical illusions, from forced perspective in most of their architecture to special effects in dark rides. Around every corner and in every attraction, Disney guests experience Disney magic – or illusion – firsthand. But, do you ever misremember attractions due to these illusions? When Disney updates attractions, I often look for evidence of the ghost of attractions past. For example, while on Frozen Ever After, I often search for evidence of Maelstrom’s old ride path, the ride rethemed with Frozen franchise characters. Now, I have a hard time distinguishing fact from fiction since it has been many years since fans explored the attraction with Vikings instead of Disney royalty.

In the case of fan favorite Expedition Everest, Disney fans find themselves questioning their memory. Why? It’s because the ride used to have quite the energetic yeti. If you didn’t witness it – or question if you did – don’t worry. Disney fans have been debating this yeti mystery and we’re here to try and solve it.

When Expedition Everest opened in 2006, the ride was a bit different than the version we see today. The ride track is the same, but the grand finale used to be more kinetic and less… disco. Now, when you ride the coaster through the Himalayan mountains, the yeti frightens guests with flashing strobe lights and roars. But, did you know that the yeti used to move? Yes! When your train passed beneath the bombastic behemoth, he actually swung his arm down to attack you – the trespassers on his mountain. Disney Parks fans who witnessed this yeti in action long for the day of his return and the retirement of his alter ego, not-so-affectionately known as “Disco Yeti.” But with Joe Rohde, the leading Imagineer of the project, retiring from the Walt Disney Company earlier this year, fans want to know, “Will the yeti ever be fixed?”

Related: A Wild Time: Joe Rohde Reflects on His Work and Legacy at Animal Kingdom

Though we don’t know if the yeti will be repaired, we do know when it stopped moving – sort of. Due to the optical illusion caused by strobe lights, some fans believe they have seen the mysterious yeti move years after it had stopped. However, a general timeline is normally agreed upon. Most Disney guests who witnessed the yeti in action saw him in the attraction’s opening year: 2006. A majority agrees that he still had a little spring in his step in 2007. In 2007, he moved sometimes, but not every day. By 2008, most fans agree that his arm-swinging shenanigans were through. However, Disney did not want new fans to feel they were missing out on an element of this coaster. The yeti always had flashing lights on him, even when he actually moved. The company kept that effect even after his threatening arm went into hibernation.

How can we know that this timeline is correct? We cannot know for sure, but we can use some eye-witness accounts to back up this estimated timeline. For these accounts, fans took to Reddit to express their memory – or doubts – about the “Yeti Mystery of the Moving Arm”.

Reddit User Broskirose says that they did not realize that the ride did not work as intended, confirming Disney’s deftness in illusions. They write:

“I know I went on it the year it opened so I probably did see it in action. But to be honest with you, I never realized the Yeti animatronic was not functioning as originally intended until I found out about it on the internet. Even after my brother knew it no longer worked he still insisted it moved when we went on it some years back.

It’s really not as noticeable as most people claim, if you don’t know the behind the scenes details.

I’d love to have the ride working properly like it was intended with the Yeti in A mode, the mist in the caves working and the steam consistently coming out the back of the ride vehicles (I can do without the hawk effect, it was never very convincing imo), but it’s still an amazing ride without all of that. The most expensive roller coaster ever built.”

With the yeti immobile, some park Guests even missed him on their first experience on the ride. Reddit user Alexdionisos said, “Yeah. When I went in 2016 I was the only one in my section of the train to see him. I rode again and the 2nd time they saw him. Crazy how easy it is to miss a 25 foot tall yeti.”

One Reddit user, Stevensokulski, claims the ride was briefly on in 2008 when Joe Rohde and his team toured Animal Kingdom for its tenth anniversary. He says that when it was turned back on,

“Many other effects were reactivated ahead of the visit… The steam coming from the trains in Everest worked for several weeks after. On Kilimanjaro Safaris, the mist that wafted across some areas of the track was turned up, as were the background animal noises in some scenes.

As to the Yeti in particular… That figure was terrifying when it moved!”

On the Reddit thread of accounts, these witnesses agree that the yeti flashed in bright lights, lurched forward, and swung his arm at guests. Some even say the arm swept so close that they questioned how far the arm was from their heads! If you want to see more eye-witness accounts, visit the sub-Reddit thread here.

The year was 2007, and I anticipated exploring Mount Everest as a bright-eyed, pre-teen Disney fanatic. I had seen the cheesy Disney vacation promo videos. I nervously rocked back and forth in the queue as I waited for the thrill of the coaster. Expedition Everest would be my first “big” coaster, as I didn’t think Space Mountain qualified (As an adult, I think it does. But, hey! Tell that to pre-teen me). As I entered the ride, I looked forward to seeing this attraction and its mysterious creature that had been hyped to me by Disney promos and commercials for well over a year.

The result: fun, but terrifying. The ride was not too scary, save for the long, high initial climb into the mountain – until the finale. I know for sure the yeti swung his arm at my train because I actually ducked my head. As I screamed at the top of my lungs, my parents laughed hysterically at my belief that the yeti would sweep me out of my seat. In spite of the terror and my parents’ giggles, I exited the ride and immediately asked to ride again. The yeti was terrifying, but his movement added so much to the lore of the ride and its intensity.

Maybe, some fans suffer from the Mandala Effect, believing that the yeti has always been motionless. Possibly, others have wishful nostalgia for a special effect they never actually witnessed firsthand. I think the truth is that Disney’s masterful command of optical illusions and powerful storytelling keeps the mysterious yeti moving in guests’ minds and hopeful memories. The strobe light gives the impression of movement by the mythical creature – if you are fortunate enough to see him as you zoom past, that is. However, I think Disney knows the yeti is an important part of the story in the ride. Therefore, they build him up so much through the queue and the yeti legend that we as guests do not have to see him move to know he did.

But, yes, we would also like to see him move. Someday, maybe we will see him move again — a new patent indicates we might. Until that day, you’ll catch me jumping a train up to Mount Everest to see his ghost of attractions present, Disco Yeti! Who’s with me?

What do you think of the arm-swinging Yeti Mystery? Do you have an eye-witness story of the Yeti in action? Let us know in the comments!