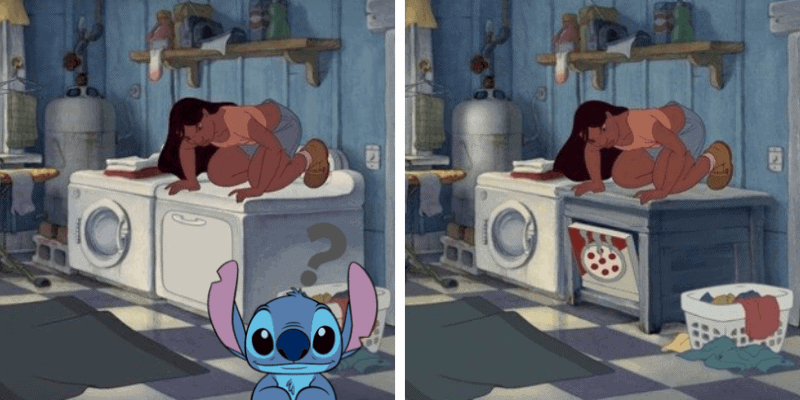 Most Disney+ subscribers are now stuck at home which means that they now have more time than ever to dive into the anthologies of Disney films. But Disniacs found one thing that is starting to make its rounds on the internet, and many are blaming the Mandela Effect.

When Walt Disney Animation released its beloved classic Lilo & Stitch, there as an early scene in the first act where Nani is chasing Lilo around the house. Many fans of the film will remember how, at the end of the chase, Lilo hides in the dryer, and Nani turns her little sister’s hiding place as a trap.

Now Disniacs who saw the film in theaters and had a copy of the DVD or VHS would remember this moment occurring around a dryer. Makes sense right? It is a very real scene that we can totally picture happening in real life.

But when longtime Disney fans went to watch Lilo & Stitch on Disney+, they found that the scene was changed.

No, it is not the Mandela Effect playing tricks on your mind. The original scene featured a dryer. But Disney changed it after they released the first edition of the DVD.

According to CinemaBlend, “It was decided to remove the dryer and change Lilo’s hiding space to ensure that little kids didn’t follow in her footsteps and start hiding in dryers, which can be dangerous.”

While this change is unwanted and unexpected by many, it makes sense that Disney made it. While no one believes Lilo was the first child to ever hide in a dryer to hide from her angry older sister, one could see dryers becoming a key part in games spanning from a classic bout of hide-and-seek to a recreation of this very scene. Lilo’s decision to hide there was out of necessity, and Nani immediately knew where she was. One can highly doubt that’d be the case for every kind of dryer in every inspired situation.

One good thing that can come out of this noticed change is a reminder for the purists and collectors. Keep your first-edition DVDs, VHSs, and Blu-Rays. From the cover artwork to full scenes, you never know how Disney will change its films down the line. Especially when we hear all of the protectionist talk from former Disney CEO, Bob Iger, about censoring classic Disney content to fit the standards of modern times. Keep those hard copies. It might pay-literally-to be politically incorrect soon.

“Wait! But what about the dryer in the ending montage?”

Yes, at the end where Stitch is doing laundry and decided to wear Nani’s bra on his head and pretend to be a superhero does have a dryer. But before you scream INCONSISTENCY, remember the movie ends on a montage showing how life finally got better for our favorite Hawaiians. They got a new house, and little hovercars, pretty sure a new washer and a dryer are also a given there, right? Let’s just chalk this up as another sign that life got better.

Is this change annoying both from a purist’s perspective and an “if it ain’t broke, don’t fix it” perspective? Yes. Is the movie ruined because of this change? No. Now, let’s just sit back, enjoy this hilarious classic, and be grateful the Mandela Effect is proven false once again.

Related: How Will Disney Turn “Lilo and Stitch” into Live-Action? Original Film Director Weighs In

Did you notice this change in Lilo & Stitch? What other subtle changes in other Disney movies have you noticed since the original release? Let us know in the comments!