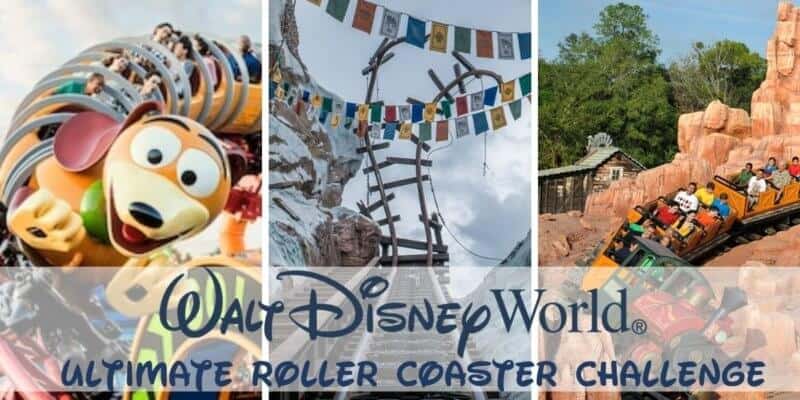 Are you a Disney World fan? Do you like the thrill of roller coasters? If you answered yes to both of these questions, we have a challenge for you!

So, let’s break it down. Below, you will find each roller coaster currently at Walt Disney World sorted by theme park, with the official descriptions of each ride. Depending on park hours, you can either start at Magic Kingdom to complete the park with the most roller coasters first or you can save this for last and try and accomplish the parks with only one or two coasters in the beginning. This is all based on personal preference as well as park hours.

As we mentioned above, Magic Kingdom currently has four coasters; however, over the next few years, this number will increase to five with the addition of TRON Lightcycle / Run.

Are you ready to take on the wildest ride in the wilderness? Big Thunder Mountain, located in Frontierland, transports Guests into the 1850s soon after gold was first discovered! Hop aboard a runaway mine train as you zip past tumbleweeds and through the mines.

If you’ve never yet ridden the coaster, be sure to check out our ride-through video here:

In 2014, Disney World debuted a new roller coaster in Fantasyland called Seven Dwarfs Mine Train. Guests can race through the mines as they spot some of the favorite characters from Snow White and the Seven Dwarfs.

If you’ve never experienced the ride, be sure to check out our ride-through video here:

The Barnstormer – Located in Fantasyland

Looking for a low-speed coaster to break up the more intense ones? The Barnstormer, located just around the corner from Seven Dwarfs Mine Train, is a fun-filled adventure perfect for all ages!

Make your way to an open-air barn where Goofy—known as The Great Goofini—performs his world-famous aerial stunt show.

Climb aboard a wacky stunt plane and hold on tight as you take to the skies above Fantasyland.

A Staggering Series of Stupendous Stunts

Ascend to the top of a wooden observation tower. Then, brace yourself as you swoop through the busy barnyard, darting and soaring before “landing” safely during the grand finale.

It’s a goofy good time for kids—and aspiring pilots of all ages!

If you’ve never experienced the ride, be sure to check out our ride-through video here:

Blast off into space on Space Mountain — a high-speed roller coaster that takes Guests on an out-of-this-world adventure in the dark!

If you’ve never experienced Space Mountain, be sure to check out our ride-through video here:

As we mentioned above, Disney’s Hollywood Studios is currently home to two coasters.

Shrink down to the size of a toy at Toy Story Land and hop aboard the one and only, Slinky Dog! This family-friendly roller coaster will take you on an adventure like never before.

Andy’s assembled his Mega Coaster Play Kit—and Slinky Dog is taking you on a wild ride. Slinky Dog’s springy coils stretch to the limit as you bend around curves, zoom up hills and drop back down.

A spring is a marvelous thing—and this attraction is wonderful fun for the entire family!

If you haven’t experienced the ride, be sure to check out our ride-through video here:

Have you ever wanted to see Aerosmith in concert? Well, it’s your lucky day! The band has just given you backstage passes, but you have to try and make it across town on time. Hop aboard your super-stretch limo and zoom past famous Hollywood icons as you try to make it to the Aerosmith concert on time.

Inside their Hollywood music studio, legendary rock band Aerosmith is wrapping up a recording session. When their manager tells them they’re late for a concert across town, the band invites you to ride along.
Hop into their gleaming limousine and speed off into the night as Aerosmith’s hard-rock harmonies fill the air.

Buckle up before zooming through the city on this roller-coaster style attraction.

Speed through iconic Hollywood landmarks. Maneuver past traffic jams and swoop into 3 thrilling inversions—2 rollover loops and one corkscrew—as the wind races across your face.

In 2015, Star Wars took over Rock ‘n’ Roller Coaster for an out-of-this-world adventure. Check out our ride-through video of the Star Wars version here:

As we mentioned above, Disney’s Animal Kingdom currently only has one coaster (but it is incredible!).

Expedition Everest – Legend of the Forbidden Mountain – Located in Asia

Beware the Yeti — on this fast-paced coaster, Guests will travel up into Mount Everest but will soon come to a halt as they notice the tracks have been broken…

If you’ve never ridden the ride, be sure to check out our ride-through video here:

Want to Partake in This Challenge?

If you want to try this challenge on your next Walt Disney World vacation, there are a few things to keep in mind — such as ensuring you have a Park Hopper on your ticket. If you need help planning out your next Disney World vacation and making sure you have everything you need to complete the roller coaster challenge, our friends over at Academy Travel can help. Get started by getting your free quote today.

Have you ever taken the Ultimate Disney World Roller Coaster Challenge? Let us know in the comments below.