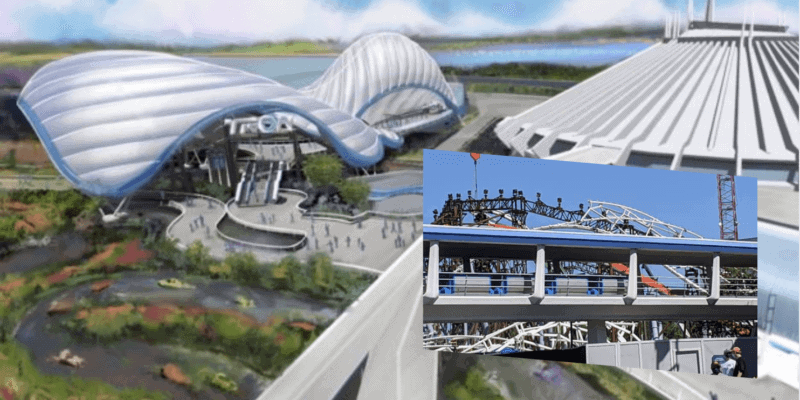 When Disney World’s TRON Lightcycle Power Run roller coaster was originally announced at the 2017 D23 Expo, we shared this video to our YouTube channel (below), highlighting what exactly Guests can expect once the coaster opens up at Walt Disney World.

Progress on the ride is continuing daily and today we have new images of its impressive freestyle wave canopy taking shape in Tomorrowland.

Here, we can easily see the wave-shaped structure (although it is still surrounded by heavy machinery).

In this photo, taken today by Inside the Magic, the crane system that is being used to construct the new TRON roller coaster is fully visible.

More on the Upcoming TRON Coaster

This new Magic Kingdom thrill ride is based on the same ride at Shanghai Disneyland, which is described as:

The TRON Lightcycle Power Run coaster is, of course, based on the TRON movies — the first film, which now has something of a cult following, made its theatrical debut in 1982. A sequel, Tron: Legacy, followed in 2010. Rumors still swirl about a third film in the TRON franchise, possibly featuring Jared Leto.

Are you excited to ride Disney World’s TRON Lightcycle Power Run roller coaster soon? According to all official reports from Disney, it is still set to open in 2021 for the theme park’s 50th Anniversary Celebration.