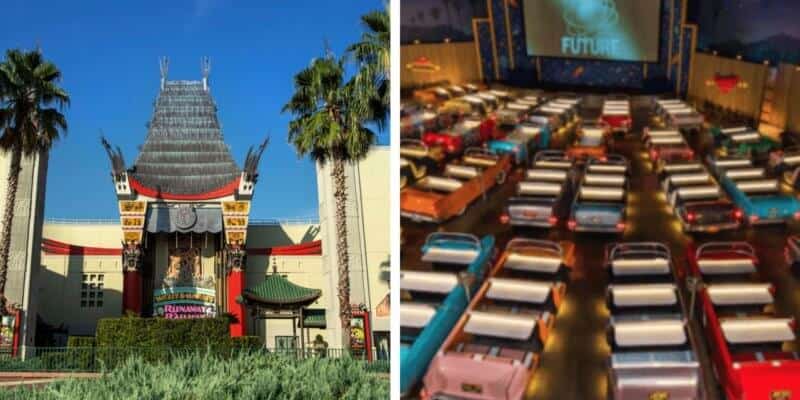 All images credited to Disney

Every Walt Disney World project begins as an idea. However, not every idea makes it into the theme parks. Disney once planned to create a drive-in movie theater on the grounds of Disney’s Hollywood Studios (then, Disney-MGM Studios). Sadly, it never came to fruition. That being said, let’s take a deep dive into what the idea was for this Disney themed drive-in theater.

It is important to note that there is not much information on this project, which is reflective of how far the idea got in Disney’s planning phase. There are only two newspaper mentions, both in the Orlando Sentinel, with only one direct quote from Disney. Thanks to YouTuber Midway to Main Street, we can take a look at what exactly was said about the project!

In 1995, the Orlando Sentinel spoke with Disney-MGM Studios Vice President Bob Lamb who said this about the drive-in theater, “We would be looking for the nostalgia angle — snack bar and all. Fortunately, the architecture in that park is for that period.” And, Lamb was right. Disney-MGM Studios was (and Disney’s Hollywood Studios, still is) very representative of many different eras, including the 1950s. The 1950s was an era in which the drive-in style of movie going blew up, with over 4,000 locations quickly popping up around America. Disney-MGM Studios not only represented the 50s stylistically, but even erected a restaurant to commemorate the era.

As Guests still visit today, 50’s Prime Time Cafe is the perfect place to go if you want to be transported into the era of I Love Lucy or Grease — or even the first episode of WandaVision! — while your server acts like your cousin and forces you to eat your vegetables. It is a highly immersive experience and made for the perfect segue to introduce more 50’s era activities and nuances to the theme park.

Disney was planning on hosting the drive-in on a section of the parking lot at Disney-MGM Studios where both classic and new movies would play. Aside from the fun aesthetic, Disney was planning on involving meet and greets with characters from the films they were showing. This means if you were to go watch Snow White and the Seven Dwarfs, you would have been able to meet Snow White herself, and likely a few of the Dwarfs, before and after the film! Considering this was something Disney often did for red carpet premieres of movies (the Snow White and the Seven Dwarfs premiere being the perfect example), to be able to experience that at a theme park would transport Guests straight to a big Hollywood premiere. This, again, would have perfectly suited the theming in the park.

Disney-MGM Studios VP Lamb then spoke out on the project again placing it in the “long shot category” of the Walt Disney to-do list. Lamb said, “There’s a lot of reasons there aren’t many drive-ins left. We need to make sure we understand them”. And, he was right. The previous number of 4,000 drive-ins across America shrunk to 600 in 1995 when the idea of an on-property drive-in was being considered.

That being said, the ’90s were an era in which Disney CEO Michael Eisner would try anything to appeal to Guests. Guests could stay in luxury accommodations and eat expensive meals — or they could camp out and cook BBQ — there were activities for any type of Guest, and if the drive-in was an experience that could attract more, it is not shocking that Eisner considered it.

In 1996, Disney announced via the Orlando Sentinel that their other drive-ins had all closed, but the MGM drive-in project was still a go. That was the last time the idea was ever discussed in a publication. As we mentioned, drive-ins were a failing business and Disney had just agreed to have AMC as their movie theater at the Disney Village (AKA Downtown Disney AKA Disney Springs). Although AMC was never Disney owned — for now, at least — Disney would want the new business venture and collaboration to be successful since it was on the property. Therefore, the drive-in could have been a possible competitor.

Midway to Main Street also noted that the location was an issue. Using the Disney-MGM Studios parking lot meant cutting out a lot of Guest parking spaces at the park. With new attractions such as The Twilight Zone Tower of Terror waiting in the wings, more Guests would begin to visit the park, and that drive-in space would be filled with cars. An expansion of the parking lot may have been possible if the land could account for it. However, it would have likely become quite tricky and a lot of work for an idea that may have failed.

A huge reason that I thought of as soon as I began learning of this idea was that Disney kind of already conquered the whole drive-in idea. Sci-Fi Dine-In Theater Restaurant opened in 1991 and to this day recreates the nighttime atmosphere of a drive-in. You literally sit in a car to eat your food while commercials and shorts from the 1950s play on the screen in front of you! A second drive-in may have been a little redundant.

One of the coolest things that Disney fans can pull from this story, and something Midway to Mayhem hit on perfectly, was that this all occurred during an era where Disney would discuss ideas, even if they did not know the end fate of the project. Now, Disney is very specific on the news and announcements they release, but in the ’90s Guests could almost get backstage access from Disney executives, such as Lamb, who would share the inner-workings of Imagineering and park planning.

Of course, the idea of a theme park drive-in movie theater on Disney World property stayed as just that, an idea abandoned by the company. That being said, I personally think that this is an idea that could work in today’s society, especially with the popularity that drive-ins once again boast and the unique experience factor that they entail. Saying you went to the drive-in at Disney’s Hollywood Studios, watched Monsters Inc., and then met Sully and Mike would be a pretty cool memory — and possibly an affordable one too!

Check out Midway to Main Street’s video below:

Do you think that Disney should have a drive-in movie theater on property? How do you feel about this abandoned Disney idea?