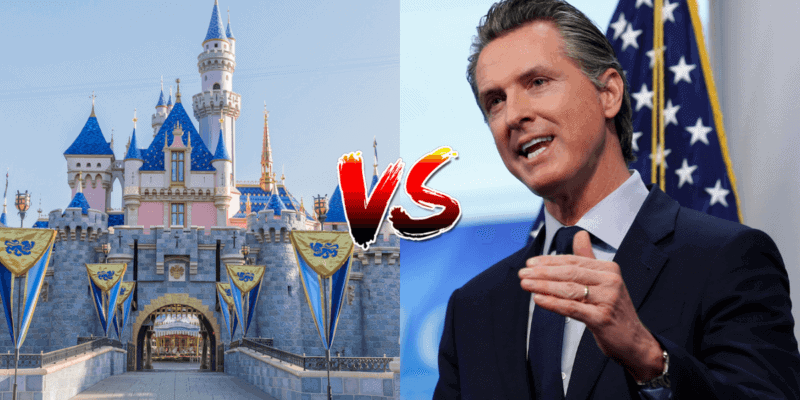 How can visiting an overcrowded Walmart or sitting inside a movie theater for two hours without a mask be safer than visiting the Happiest Place On Earth?

For nearly seven months, both Disneyland and Disney California parks have been closed amid the COVID-19 outbreak. Early in 2020, as a matter of fact, not only Disneyland Resort, but every Disney theme park on earth was closed due to the coronavirus pandemic.

Since then, five of the Disney Parks and Resorts around the world have reopened — all except Anaheim, California’s Disneyland Resort. Why, you ask? Well, according to California Governor Gavin Newson, it’s just not time.

But time for what, exactly?

In a recent press conference with Anaheim officials, Anaheim Mayor, Harry Sidhu pleaded for the Governor to visit Orange County and see the long-lasting effect of keeping it in the Red Tier of his Blueprint for a Safer Economy.

Disney Parks, Experiences, and Products Chairman Josh D’Amaro stated in a press conference that “it’s time” for the parks to reopen and directly blamed California for the recent layoff of thousands of Disneyland employees (28,000 Cast Members across Disney World and Disneyland have lost their jobs).

These have been unprecedented times, and, in my opinion, the one thing that could cheer-up a large majority of California, the Pacific Northwest, and all of America would be visiting Disneyland once again.

Rather than working with The Walt Disney Company, or even allowing Disney to make the call about when to reopen as Florida Governor Ron DeSantis did, Governor Newsom announced the state would be investing millions into having “clean energy by 2035.” Ironically, he was standing in front of the old Disney California Adventure “CALIFORNIA” sign during the announcement.

As Disney has shared and as many agree, the company has proven itself repeatedly that they can safely reopen their parks, adhere to local and government guidelines, and protect Guests and Cast Members from contracting the virus. In recent months, we’ve seen Disney going above and beyond to instate social distancing guidelines in their theme parks, as well as adopting mandatory temperature checks and face mask requirements to ensure everyone visiting Disney Parks worldwide can stay safe.

According to Anaheim’s mayor, over 80,000 jobs are being affected due to Disneyland remaining closed. Disneyland Resort, neighboring hotels, restaurants, stores, and services like public transportation (ART) have either been closed temporarily or permanently due to the inability of California Government officials being reasonable with reopening guidelines for theme parks like Disneyland and Disney California Adventure, Knott’s Berry Farm, Universal Studios Hollywood, and Six Flags to reopen safely.

But from my perspective, who knows how much longer some of these theme parks (and their surrounding areas) can last with tourism being obsolete this year?

After Governor Newsom stated that the California government would be “stubborn” on releasing guidelines for theme parks to reopen and even negotiate with the companies that are losing millions, Disney pushed back after the Cheif Medical Officer of Disney Parks, Experiences, and Products, Dr. Pamela Hymel stated:

When you think about it, having Disneyland reopen is more than just riding the Mad Tea Party or visiting Mickey Mouse. I believe it’s about tens of thousands of people being without work. That means families cannot provide essentials like food, new clothes, or keep the electricity on at their homes. Cast Members and employees at other theme parks are people too, but it seems that California officials have forgotten that after Governor Newsom stated:

“I understand the dialectic, the friction, the frustration that many business leaders have that they want to move forward sectorally to reopen. But we’re going to be led by a health-first framework and we’re going to be stubborn about it. And that’s our commitment, that’s our resolve. And while we feel there’s no hurry putting out guidelines, we’re continuing to work with the industry, amusement parks.”

I think the key phrases here are “no hurry putting out guidelines” and “I understand.” Considering this statement and all of the calamity that’s risen from the battle of reopening the parks, it’s a shame that the California Government is in “no hurry” to work with Disney and help reopen the parks so visitors can help stimulate the suffering economy and Cast Members can provide for themselves, their families, and their community.

The California government did have preliminary guidelines for their theme parks to follow, but theme park officials, including Disney Executive Chairman Bob Iger, pushed back against proposed regulations. At this time, Governor Newsom has elected to delay the release of theme park reopening protocols until he and theme park officials can come to an agreement that better suits all parties.

While many worried visitors claim that guidelines won’t follow guidelines and protocols in the parks, the same principle applies to open businesses in California like Costco, Target, and Walmart. In my opinion, we can’t expect Disney to be the COVID-19 police, and guidelines are a responsibility that every individual should follow so we can get back to some sort of “normal.”

And if you don’t feel safe visiting Disneyland when it reopens, there’s no pressure to go. You should only be outside at stores, restaurants, and theaters if you feel safe enough to do so.

In the midst of all of this, Disney CEO and Chairman Bob Iger stepped down from the California Economic Recovery Task Force. Iger has been a part of the task force since April and has spoken on behalf of The Walt Disney Company to negotiate with California officials, but they’re reportedly “unreasonable” to work with.

I don’t think The Walt Disney Company is pushing for their parks to reopen to draw in a profit, but instead to provide for their Cast Members and communities.

I believe that if Disney had the opportunity to decide when it would be best for Disneyland and Disney California Adventure to reopen, things would be a lot different by now, and thousands of Cast Members would still have their jobs.

While it’s a shame that all of this has happened, let’s hope that both sides can come to an agreement and let California theme parks reopen.

What do you think about California Government officials not reasonably working with Disney? Let us know in the comments below.