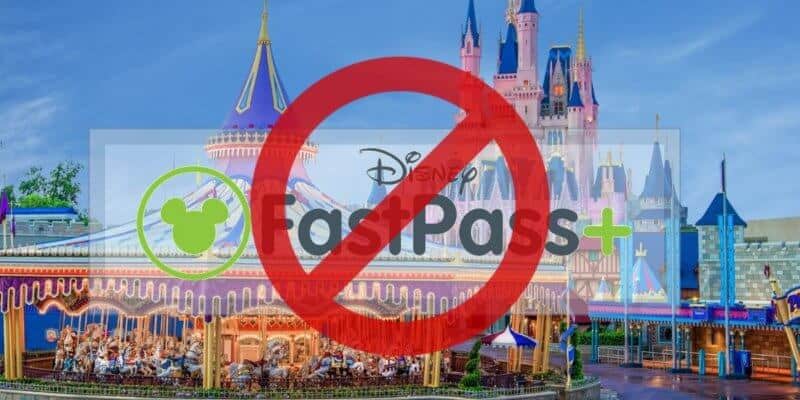 When Walt Disney World announced their reopening plans and dates, they also announced quite a few changes that would take place when the parks reopen in order to help keep the theme park safe.

This leaves a lot of guests worrying — How can we enjoy our Disney World vacation without FastPass+? FastPass+ allowed guests to bypass the lines of popular attractions including Millennium Falcon: Smuggler’s Run or Slinky Dog Dash in Disney’s Hollywood Studios, Expedition Everest or DINOSAUR in Disney’s Animal Kingdom, Frozen Ever After or Test Track in EPCOT, and Seven Dwarfs Mine Train in Magic Kingdom.

Well, we want you to know that just because FastPass+ is temporarily suspended and Walt Disney World won’t have this ability once the parks reopen it doesn’t mean you can’t enjoy your Disney World vacation! Here are all our tips and tricks for enjoying a Disney Parks vacation at Walt Disney World Resort without FastPass+.

While wandering through the parks, always make sure to have access to My Disney Experience. This can help you determine where you want to head next with already having an idea of how long the wait will be.

For example, if you are enjoying the day in Magic Kingdom Park and are currently in line for “it’s a small world”, check My Disney Experience for wait times of nearby attractions — Haunted Mansion, Peter Pan’s Flight, Mickey’s PhilharMagic, Prince Charming’s Carousel, etc. — and then determine where you will be heading next!

By doing this, you can eliminate the stress of walking from attraction to attraction to find out how long each line is and you can smartly plan out your afternoon.

Pick and Choose Which Popular Attractions You Want To Enjoy

Without FastPass+, you may not be able to ride all of the popular attractions. Chances are you won’t be able to get on Seven Dwarfs Mine Train, Space Mountain, Peter Pan’s Flight, and Splash Mountain all in one day. My suggestion would be to pick and choose which ones you really want to do (whether that is based on personal preference or wait times) and save the others for a different day.

Check Out Smaller/Less Popular Attractions — Still Soak Up The Magic

Check out attractions such as the Tomorrowland Transit Authority PeopleMover, Carousel of Progress, Mad Tea Party, and Enchanted Tiki Room in Magic Kingdom.

If you are over at Disney’s Animal Kingdom, be sure to swing by It’s Tough To Be A Bug, Primeval Whirl, or Triceratop Spin.

Spending the day in EPCOT? Try Living with the Land, Journey into Imagination with Figment, The Seas with Nemo and Friends, or Turtle Talk with Crush.

And if you are in Disney’s Hollywood Studios you can try visiting Muppet*Vision 3D or Voyage of The Little Mermaid.

Typically, I would suggest going to see some of the Disney characters, watching the parades, or even the fireworks, however, one of the major changes Disney World is implementing is the suspension of these experiences as well. But don’t let this scare you — There is a lot to do in Walt Disney World even despite the temporary suspension of these experiences.

“We are temporarily pausing on some experiences like parades, nighttime spectaculars, character meet and greets and makeovers to accommodate social distancing. However, our characters will still be in the parks to entertain and delight our Guests. The Dapper Dan’s will hopefully perform still however I can not guarantee it.“

Shows Such As Voyage To The Little Mermaid, Mickey’s PhilharMagic, Frozen Sing-A-Long and More!

Though Disney has not yet confirmed or denied shows such as Voyage to The Little Mermaid, Mickey’s PhilharMagic, or Frozen Sing-A-Long will be open to guests come mid-July, if they are opened — be sure to check them out! This is a great way to sit down (in the air-conditioning), relax, and still enjoy the Disney magic.

We hope that these tips and tricks help you enjoy your Walt Disney World vacation without FastPass+. What are your tips and tricks? Let us know in the comments.