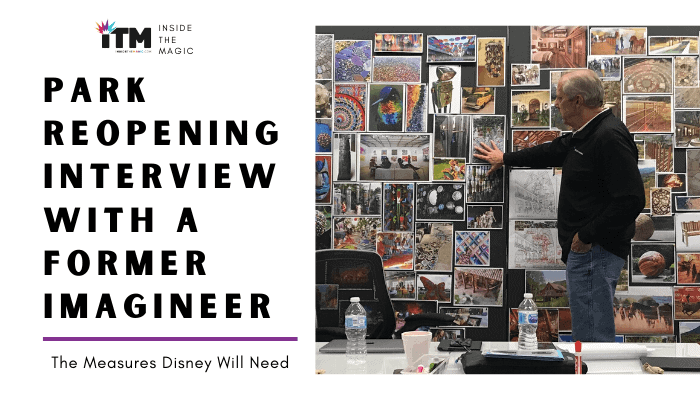 Bill Coan was an Imagineer for over 14 years with Disney. Budding his career at Epcot and then moving to Disneyland Paris in 1993, Coan spent his formative career years with the Walt Disney Imagineering crew. After learning multiple tricks of the trade, Bill then set out on his own and joined other former Imagineers at a new company called ITEC Productions.

I sat down with Bill for a timely chat and had a chance to pick his brain about what issues Disney, Universal, and other contemporaries would be facing as they began to reopen their theme parks. Coan’s answers gave me great insight as to the reopening process, how and what should happen, as well as a large dose of managing guest expectations.

As a young startup, ITEC burst onto the entertainment scene in 1986, slowly moving up the Theme Park Consultation ladder to a now-global platform. ITEC Entertainment, as it is known now, offers theme park consulting services around the world in Los Angeles, Shanghai, and is now setting roots in Japan. Some of their clients include the likes of Disney and Universal. Bill Coan joined ITEC in 1993, just after he left Disneyland Paris, and has served as the company’s President for 21 years. Now, from his seat in Orlando, Bill is watching Disney just like we are.

We’ve seen the guesses. That Analyst report that many people took as Gospel (it wasn’t). The thoughts on retraining Cast Members. Heck, we even tuned into Bob Iger’s sharing of the obstacles that lay before the State of California. But the fact of the matter is that Disney has made no other formal reopening announcement aside from its “until further notice” release.  Bill Coan echoes the idea of we’re all watching Disney.

The fans, the “other” Parks; even the Fun Spots of the nation are watching Disney in order to see how this is all going to work. Obviously, Disney and Universal are the most sophisticated as far as theme park science goes, so we will wait to see how they “wake the Parks up.” Whether or not they can do it without a hiccup remains to be seen, as well as if the smaller theme parks across the nation can survive the closures.

But there is more than just Disney’s operating preferences to consider. Disney will define how they open, but they must consider the regional task forces as well as state official’s decrees.

Various theme park properties in various parts of the world reside in jurisdictions that are governed differently and Disney, for one, will need to pay attention to not only their operations issues but local safety ones as well. Balancing what business choices they want to make vs. what the authorities will allow them to do will most likely be decided once they get an “all clear” from the officials.

Coan supposes that Disney will have several models for reopening and staging over time, and will most likely be guarded at first. This makes perfect sense, as Walt Disney World, for example, closed in stages, and is likely to reopen in the same fashion as they manage safety checks.

Does Disney Open Just One Park At A Time?

We’ve seen the “Secure Circuit Protocol” rumor circulating, and it’s a lot to take in. But what would it do to Walt Disney World to open just one Park? I asked Bill Coan what he thought about that. Coan reinforced that Walt Disney World Resort is more than one park. They have made their mark in the world based on being a vacation destination; several Disney Parks and a multi-day experience define the WDW adventure.

Opening just one park wouldn’t bring the masses of people that support the business model of the Park (and even that will have to change for a period of time). Selling merchandise and foodstuffs will also be a mainstay of income for Disney, per the usual, but the business model and the safety model must be balanced with expenses, as a single operation day for a Disney Park is a large undertaking.

Perhaps Disney will open portions of each Park and limit the capacity, allowing for social distancing both in queues as well as the main thoroughfares. Of course, making the guests feel comfortable as soon as they even consider going back to a Disney Park will be an important part of the equation…

We’ve all said before that Disney has theme park operation down to a science. After 60 years of operating, they often know what we want before we want it, as well as how to give us a comfort level that surpasses our expectations. Bill expresses the need for Disney to make a large outreach effort to guests BEFORE the Parks open to convey the safety level they will provide. If they can’t make Mom feel immediately that family health needs are being met, the vacation will be a hard sell to make. Disney will have to demonstrate upon first sight the safety measures they are taking as well as being fully aware of the daily operational strategies they need to enact.

Transportation at Walt Disney World has also been nailed down to a science. From buses to watercraft, monorails to Skyliner, Disney will need to consider how guests move between their far-spaced Parks, as well. Bill Coan recommends reducing capacity on vehicles such as watercraft and buses, and reconfigure how they load and unload monorails in order to maintain flow as well as keep guests separated.

Keeping families spaced from one another will also be a challenge inside attractions with the queue system. Shanghai Disneyland had been testing queue spacing this month, while we’re been watching Disney test virtual queue software in the My Disney Experience app. But with queues having been a topic of ire forever, Disney officials will have their hands full considering how to deal with them safely in the face of Coronavirus.

Traditional queues typically cause bottlenecks and will never solve a social distancing problem, but the equation remains a mechanical one. Coan hearkens to a 19th-century revolving door where a very measured number of people are slowly allowed to trickle through. This method, whether done by digital boarding groups or by managed queue lines, will be highly effective for spacing, but inherently limits the capacity of any ride both in the queues as well as the operation. For instance, Soarin’ may only take one family per row instead of being packed seat by seat the traditional way.

Grab your hand sanitizer; we’re about to discuss the cleansing issues that Disney faces. The Walt Disney Company and its theme parks have always been miles above the rest when it comes to sanitation, cleaning, and maintaining a polished image. As guests are concerned about personal health in the face of this pandemic, cleaning measures across the board need to be elevated. Bill Coan notes that until a solid vaccine for COVID-19 is available, Disney will have to continue to jump the hurdle of “how do we get Guests back into the park in regular numbers?”

Coan again points to the pre-visit marketing efforts that Disney will have to relate to their locals, Annual Passholders, and new Guests. Park-goers will need to walk into the park and SEE what Disney is doing to keep them safe as well as gleaning from pre-visit marketing what will be done. If that means increased washing, sanitizing, restaurant spacing, or even facial masks, Disney will need to pay attention to that.

The sanitation measures themselves still have lots of variables. Former Imagineer and now-consultant Coan surmises that new technologies and inventions will solve a lot of problems.  New UV wands and sterilization items will be more effective in speedily and safely sanitizing ride vehicles between runs rather than hand wiping with Lysol wipes. Of course, retraining employees with these new measures will take time, but it’s important!

Health screening may take the forefront in bag check lines or in the security centers. Temperature checks (and also antibody checks, if we ever get that far) may be of use, as well. But perhaps removing fingerprint checks or continuing to offer and require hand sanitation will be effective, too. Do employees wear masks, or do Guests wear them too? This has certainly been on our minds since the CDC recommended the general public wears masks when outside of the home.

While there is still time for Disney to create its official plan and spread the news on the Parks reopening, we will still naturally wonder what we can expect in the upcoming months. As vacation planners and Park enthusiasts, we’re beyond Alice-curious. Thank you to Bill Coan for giving us much-needed insight as we count our un-birthdays until we can once again walk in our Wonderland.

What do you expect to see when you walk back into your favorite Disney theme park? Leave us a comment below!