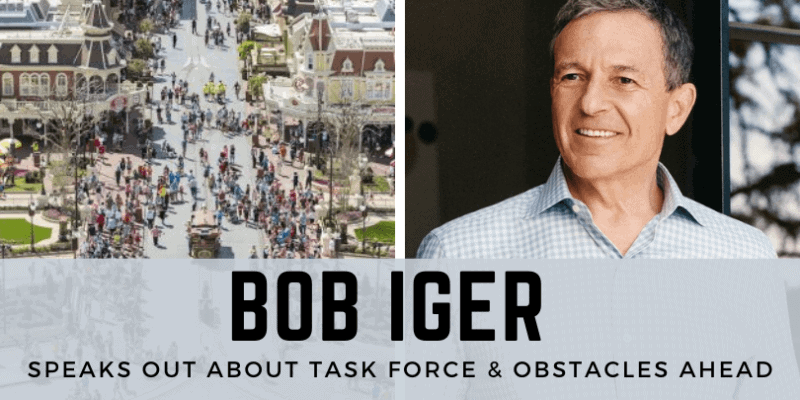 Some Guests are ready to return to the Disney Parks. Others want to hear the plan for the future. California’s Governor Newsom has put together a task force, having approximately 80 members on board, which is in charge of reviving California’s economy. Inside one of the nation’s most populated states, the economic damage was brought about by the Coronavirus and pandemic issues have forced quick closures for the sake of health, but also to the detriment of our wallets. The Governor has turned to his group of business leaders, labor unions, and former Governors, including Bob Iger, the new executive chairman of the board for the Walt Disney Company, a part of this new task force. Iger has recently started to voice his opinions about what lies ahead.

Bob Iger spoke out about the California recovery task force and the obstacles ahead, saying to KABC,

One of those procedures will be increased hygiene, but it’s likely that we’re going to need some mass testing, at scale, and some form of contact tracing as well so that we can identify people who have been exposed or people who have had the virus and may be of harm to others. Those initiatives are needed in the absence of therapeutic medicine or a vaccine, which months is months to a year away,” Iger said.

The economic recession is at hand, however, we must not fully remove our parachute that is preventing the spread of the disease.  California Governor Gavin Newsom spoke at one of his daily news conferences on the state’s response to the pandemic, saying, “We recognize our unique responsibility as Californians to do our fair share, and to help lead the way in terms of job creation, retention and job growth.”

In terms of global efforts and considerations to stem the spread of the pandemic but to also reopen businesses and daily life, countries have examined the possibility of temperature scanners, mandatory masks, furthering social distancing, and phased reopenings. While the U.S.A. needs to consider local options as well as national ones, more work is yet to be done.

Inside The Magic recently reported on Disney’s effort to either extend or partially refund Annual Passholders due to the closure, and while many guests were appreciative of these new policies, other guests were ready to hear about when and HOW the Parks would reopen. Many even weighed in on our Facebook post about what they would accept at the touchpoints or gates in order to be let back into the Parks.  Whatever must be done must be planned, announced and implemented. Groups like Gov. Newsoms would be welcomed in other states, including Florida as Walt Disney World attracts guests from all over the globe.

Do you feel confident with Bob Iger as a part of California’s Recovery Task Force? Leave us a comment below!