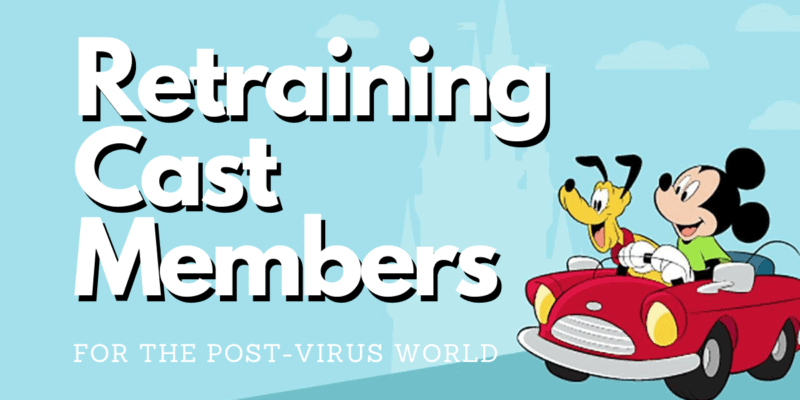 Now that plans are being created on how we will reopen the nation, Disney fans are now starting to look at how Cast Members and other theme park employees will be retraining for the “whole new world” ahead of us. As Cast Members know from Traditions, the first and most important of Disney’s four keys is Safety.  This key now takes the front seat of our minds as the pandemic continues to batter our nation’s citizens and healthcare workers.

In the past weeks since the Disney Parks closed, the theme park, airline, and hospitality industry have been decimated. Workers have been laid off, furloughed and left to attempt to file for unemployment. As the industry struggles to regain its footing and reopen, new measures will inevitably be taken to monitor public health and serve customers at the same time. New intense standards are afoot…

There has been speculation that taking temperatures at the theme park touchpoints or gates may be enacted (however useful that is or is not), but we agree that Cast Members and other theme park employees will need to be trained on a no-touch method. Other sorts of scanners may also be utilized at airports to ensure the public that airplanes are still a safe method of travel, as we find that the general public is timider to fly now than directly after 9/11. Both of these methods will require not only training but the purchasing and maintenance of the devices.

Wiping down and spraying of common areas, like countertops, ride vehicles, tables and more will be necessary, as well. Just how often will need to be decided with WHO guidance and managerial support. Even more Cast Members or crew may be trained to scan the crowds and spot signs of illness or health struggles that may need bolstering or attention.

Management and workers alike will face a learning curve as fun and safety need to be balanced. With expected lower and more controlled volumes of people, these safety changes will likely be mandatory and not optional. Walt Disney World, in particular, draws massive crowds from all over the globe, and high volumes of visitors can be counterproductive in containing the spread of the virus. Cast Members will need to add Cleanliness as a Disney key in order to manage the post-virus world.

Since these keys of Safety and Cleanliness (we’re just going to add it as our personal key!) are now expected to be locked together, training of official health guidelines and rules will also have to match up with large group safety and the cleaning of common areas.

Many rides, productions, and other attractions will need to look at implementing federal and local guidelines such as social distancing and perhaps empty rows to keep guests separated. Ride capacity may be limited, and in turn, queues may be spaced and appear longer than they used to. Virtual queues as seen for Rise of the Resistance may become synonymous with Park going.  Ride operators and attraction managers will need to be trained on these new regulations, and if we know Disney, they will be strict.

“We may not be able to put 20 people in a car sitting tightly with a lap bar anymore,” said Kelven Tan, vice president of business development for Asia for theme park ride designer Dynamic Attractions, which has an office in Orlando. “We will have to replan our parameters. Maybe we can’t hit 2,000 people an hour [on a ride] because we have to have an empty seat now. Or do workers spray and sanitize after each load, is that it? So if we go on 10 rides, do we get sprayed 10 times?”

The “Secure Circuit” protocol was rumored on a forum this week (we reported on a rumor roundup here) and could possibly give us some clues as to what sanitation and safety measures could be implemented by Cast Members. This rumored “program” would include strict measures such as no theaters, no parades, no castle shows, no fireworks, meet and greets or character dining in order to reduce crowd gatherings. Ride vehicles would need to be sanitized for every run, adding time to lines and queues. Social distancing would end up having an effect on Monotrails, ferries and other transportation options. Perhaps health forms would be signed or masks would be required for adults. This would certainly be a measured take in the Florida humidity. Whether or not this forum post was truthful or not has yet to be seen. The official word from Disney always takes precedent.

Every “Roll” a Starring Role

“Everyone will have a role in sanitation and health care, whether it’s the TSA or the airlines,” says Phil Brown, CEO of the Greater Orlando Aviation Authority, which oversees Orlando International Airport. While the airports, theme parks, and hospitality industry have obviously similar tasks ahead of them, we all await more guidance from local, national and global authorities. New safety guidelines will have to be written and businesses will need to take time to retrain all workers in various industries.

As a nation, we will have lots of ground to cover before we can get back to reopening, much less our “old” normal. But as we can see, they are starting to happen as we look to the future beyond the Quarantine.

How Do You Think Retraining Will Affect the Timeline? Leave us a comment below!