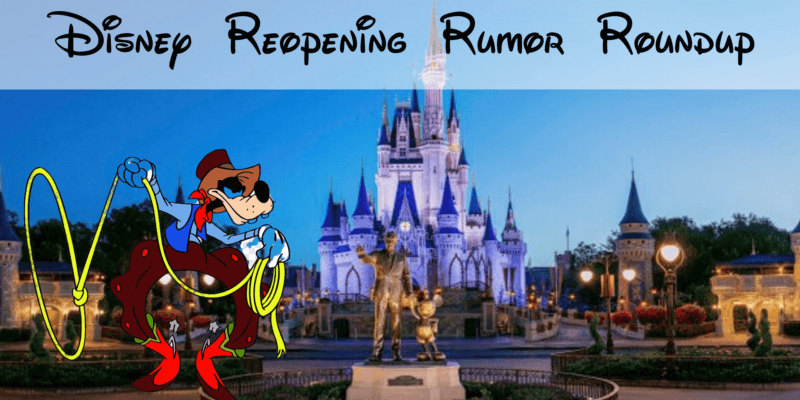 With Disney Parks closed, fans have tons of time to wonder and speculate about all the missing details we’re waiting on Disney to confirm. When will the parks reopen? What will the new process be like? Will the parks operate at limited capacity? Will our temperature be checked at the gate? And the list goes on.

While the endless stream of questions we all have are yet to be answered by Disney, some fans have come up with their own guesses as to what the answers will look like.

These guesses are all fun to entertain as we all anxiously await official word from the Walt Disney Company. However, let us not forget, these are all very much still rumors!

Disney is currently allowing bookings as early as June 1st; that is with a long list of disclaimers attached to those reservations. However, third party websites, like Tripadvisor, are showing a travel notice for Disney Resort Hotel Properties, which says the properties are temporarily closed through July 30th. We tried to replicate this notice with other third-party booking sites to no avail. So, July 30th goes on the rumor pile!

According to wdwintel.com, a June 16th soft re-opening is likely. They add that their best guess is based upon “the recent guidance from Orange County in the State of Florida, wherein Mayor Demmings stated that he did not foresee opening the county economy and lifting various orders until the end of May 2020, beginning of June 2020.” #rumor

Analysts are jumping on the bandwagon trying to guesstimate reopening dates. The latest we’ve seen is from an article MarketWatch shared stating a January 2021 opening. For the mere reason that breaks our Disney-loving hearts, we will quickly toss that guess deep into the rumor trash pile!

Recent reports have also shared that Disney supposedly sent an email to furloughed employees that stated the following:

“State laws require us to inform you that you do have certain bumping rights and that at this time we do not anticipate the furlough exceeding six months.”

Fingers crossed we hear news much sooner than that!

Rumor #2: Will our temperature be taken at the park gates?

Bob Iger was interviewed recently by the New York Times. He shared many details about his plans to aid Disney as they navigate this never-before-seen crisis. One of his comments was about taking heed to what he’s seen China do, regarding scanning guests for illness in the form of taking their temperature.

Although Iger was quoted saying this, no official change in operations has been announced. Therefore, while this is certainly a possibility, it is still sitting in the rumor pile until Disney makes an official announcement.

This one is a long list of speculation! In a Disney fan forum, one user shared what they deemed legitimate information claiming they have “multiple corroborating sources” providing this information.

1) There is a worst-case scenario plan for WDW that is either developed or under development which prioritizes maintenance for the remainder of 2020 if the parks and resort are unable to reopen. This would see certain areas of the resort under much less upkeep in order to limit costs. This might also see many of the roads closed at WDW to public access.
2) Disney is currently in talks with the NBA to resume the NBA season / postseason with the players finishing all games at the ESPN complex. Details are being negotiated, and could fall through, but players would likely stay at Caribbean Beach Resort with Cayman, Sea Breeze, and Victory Way closed except to NBA and Disney vehicles. The aim would be to restart the NBA in late May to early June. Again, this could fall through, but it is being worked on and I believe some details have already begun to leak.
3) DeSantis has been in communication recently with Disney, Universal, IAAPA, etc, and is keen on getting the parks up and running as soon as safely possible. This is a marked departure from the approach the California government is taking. While Disneyland may remain closed for a long time, there is actually optimism that WDW may be able to reopen during the summer with intense restrictions and limitations.
4) The “Secure Circuit” protocol is still the preferred plan for reopening. Secure Circuit does the following:

Best regards – hope everyone is safe.

That is quite a bit of information, and although incredibly well thought out, none of it has been confirmed.

What are your thoughts on all this speculation? Do you have your own guesses on all these rumors? Let us know your thoughts in the comments! And be sure to keep checking back with us here at Inside the Magic for the latest Disney news and magical content! See ya real soon!