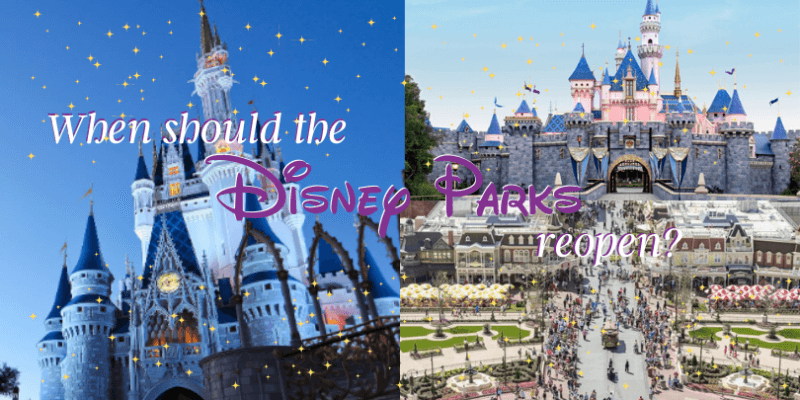 Disney has furloughed tens of thousands of workers at Walt Disney World Resort in Florida and Disneyland Resort in California. Right now, there is no certain date when the Disney Parks in the U.S. are set to reopen — all we know is they are closed until further notice. But when should the Disney Parks reopen? How soon is “too soon” and how long are Disney fans willing to wait?

In one of our recent Facebook posts, we asked the Inside the Magic readers when they think the Disney Parks should reopen.

Inside the Magic readers: we want to hear from YOU!

When do you hope the Disney Parks reopen? June 1, or later this year?

Would you rather the parks reopen as soon as possible but with restrictions, or open at a later date business-as-usual?

Let us know in the comments!

Here’s what Disney Fans had to say.

Some Disney fans responded with answers that may surprise you. Even though Inside the Magic readers love the Disney theme parks, it became clear in our Facebook post that many are willing to wait as long as it takes for them to reopen. A large percent of responses stated that Disney should wait to reopen the theme parks “until it is safe to do so.” And many pointed out that they wouldn’t want to go to the theme parks anytime soon if they would be “half-open” or if restrictions would be put in place. Here are some of those responses:

“[Disney should open] Later business as usual. Who would want to spend that much money for only part of the experience?”

“As much as I want to say earlier with restrictions- I say later to play it safe and get a good game plan together.”

“Later business as usual! When we get to go back I wanna feel the Magic and be able to just be there and enjoy it.”

“Later date for the safety of the public. Visitors come from all over the world to these magical parks and its in everyone’s best interest to be extremely cautious when deciding to reopen. Vaccine makers are working at break-neck speed to fight this virus. Let’s stop the spread until it’s safe!”

“Later, when it’s safe to do so. Like someone said above why would you want part of the experience! I can’t wait to visit the most magical place on earth again when this is all over ? stay safe everyone”

“Later. We love Disney but with all of the non-believers out there, partying, going to the beach, shopping without any care in the world, we would all be exposed again and back to square one. My vote is wait for the medical professionals to make a decision and be sure my grandchildren will be safe.”

“Later, business as usual. I’d hate for someone’s trip of a lifetime to be ruined by this virus. Safety is most important.”

While others took a different approach. Many theme park fans had opted to reschedule their Disney vacations for this summer after they were prompted to cancel because of the unprecedented Disney World and Disneyland closures. Others always had trips planned for the coming months and want to make sure those go through. Here are their opinions:

“June. I’m all for restrictions as long as I get my Disney fix.”

“?? for a June 1st reopening and live being able to start being back to normal! I can’t imagine a summer with no parks, swimming, festivals or theme parks ?”

“June with restrictions and if not June then at least by October. That’s when we have both our trips planned.”

“July 1 right before the 4th of july which is a Saturday plus the time it takes them to get supplies back into the parks and make sure everything is up to par and yes with restrictions.”

“Open for the Summer, limited number of guests, use max pass as a crowd movement/restriction and reservation system. Set the itinerary for people allowing riding, shopping and eating times.”

Some Cast Members and their loved ones commented on our post saying they need the parks to reopen sooner because jobs are at stake. And since the summer season is by far one of the busiest times to visit Disneyland and Walt Disney World, many fans think Disney should reopen by then. Here’s what they had to share:

“Soon as possible with restrictions. I want to go back to work.”

“For the sake of the furloughed workers I’m ok with May but with restrictions. It may take a while to get back to the way it was and that is fine. Many are out of jobs and deeply affected by the crisis. We’re still waist deep in this thing.”

“Would rather they wait it out to avoid further closures down the line, though my heart breaks for the cms right now.”

“When it’s safe. And I say that as my family are castmembers sitting at home ?”

Right now, Disney hasn’t yet given any indications of when the theme parks will reopen — although the cancellations of events and postponement of new lands opening could possibly indicate a later date than anyone anticipated. Still, as Executive Chairman Bob Iger hinted, health screenings and other safety measures — maybe even more virtual queues? — could be in place once the parks do reopen. But even then, attendance could look nothing like what we’re used to.

We can’t wait to ride our favorite attractions like Tower of Tower at Disney’s Hollywood Studios and meet Mickey Mouse in Toontown at Disneyland park. But we also want to make sure everyone keeps their health and safety in mind.

We hope to continue to spread magic on our website as all of us fans wait for the day when The Walt Disney Company opens up the theme park gates. For now, we hope everyone stays healthy and safe during this time.