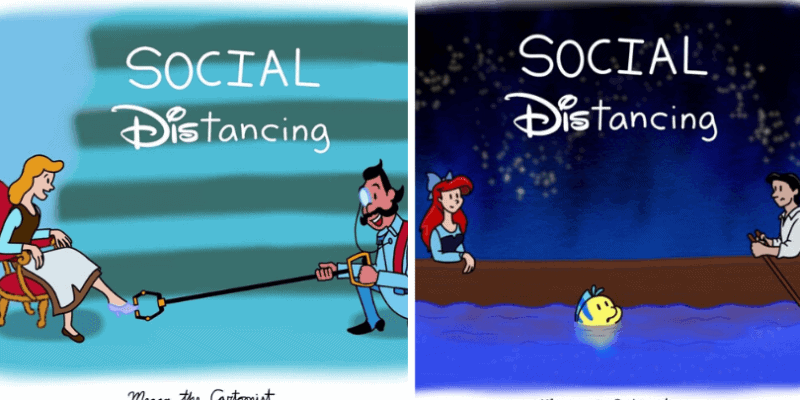 During this tumultuous and uncertain time, it can be comforting to find cute and funny things to get us through. Some of us are relying on Disney+ marathons to bring a smile to our face, while others are using their skills to create works of Disney art as a form of therapy. One cartoonist has been reimagining pivotal scenes from Disney films as though the characters were social distancing…and the results are hilarious.

This series of cartoons was started by creative artist and Disney fan Megan, who has been sharing her art on Reddit under the username MegantheCartoonist.

Her series — appropriately called Social Distancing, Disney Edition — began a few days back when she shared her own cartoon version of Simba, Timon, and Pumbaa during the “Hakuna Matata” scene of  The Lion King. In the film, this scene is pretty memorable. But in Megan’s reimagined version, the  Lion King characters comply with social distancing by staying at least six feet apart. Take a look:

Megan didn’t start there. Her Lion King cartoon was the first of many. Since then, she has shared social distancing cartoons featuring the two lovable pups from  Lady and the Tramp.  In the cartoon below, you can see that Lady and Tramp are now sitting at separate tables during the spaghetti and meatballs “Bella Notte” scene.

Megan also shared a reimagined version of the life-changing scene from  Cinderella, only this time the Grand Duke isn’t using his bare hands to help Cindy try on the glass slipper.

And in her most recent cartoon, Megan shows Ariel and Prince Eric during the “Kiss the Girl” scene from  The Little Mermaid. Except now, they probably won’t be doing much kissing.

We love showcasing artists who love Disney as much as we do, and seeing our favorite Disney characters participating in social distancing helps us cope a little but more. If you love Megan’s work, you can view more of her creations on Reddit!

For more reimagined Disney characters, check out some related posts linked below: