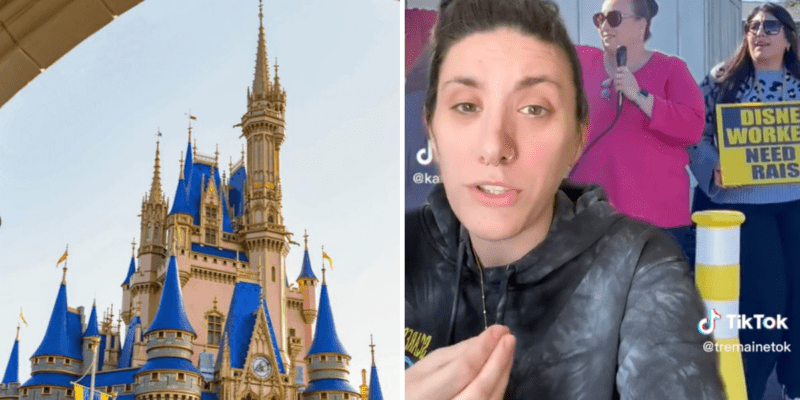 But some Disney Cast Members quickly pointed out the nefarious intent behind the good news. Just a day prior, Disney CEO Bob Iger revealed that hybrid Disney employees would be required to come into the office four days a week. This move was incredibly unpopular among Cast Members, who called the Disney CEO an out-of-touch “old white man.”

On the same day, a Union advised Disney Cast Members to reject a proposed $1.00 per hour raise offered by The Walt Disney Company. This comes after months of unsuccessful negotiations.

Now, a former homeless Cast Member is speaking out on behalf of Disney Parks employees struggling to get by. Jessica (@tremainetok) shared her thoughts on Disney’s “dismal” offer to the union on TikTok:

“Disney offered a minimal $1 raise for all Cast Members despite the average rent in the area being $2,000 a month. There has been a disgusting hike in rent here in the last year,” Jessica said. “But I’m here to tell you, this is nothing new…Full-time Disney Cast Members have had a homelessness and food insecurity problem for decades.”

Jessica started working for Walt Disney World Resort in 2010 and became homeless less than a year later. She was forced to live out of her car in a Magic Kingdom employee parking lot.

The former Disney Cast Member also argued that it’s wrong for The Walt Disney Company to purposely pay their employees so little that they require government assistance to survive.

“Since when is it okay for a corporation that employs a large chunk of the population in one city to rely on the state and the federal government to support their employees?” she asked. “…They are draining money from the federal and state economies.”

“Who lobbies those politicians who contribute to those employment laws? Disney,” Jessica said.

While Jessica doesn’t want people to boycott Disney Parks or Disney+, she advocates for people to speak out as much as possible.

“Walt Disney World is built off the backs of these low-wage workers, and every single one of us who doesn’t speak out or try and help in any way is contributing to the problem,” she said. “To my union Disney Cast Members, please vote. You are the ones who are ultimately going to make a difference here. Do not let Disney’s ‘family magic’ union-busting techniques contribute to your misery.”

Share your thoughts on the union negotiations at Walt Disney World Resort in the comments.

Please note that the story outlined in this article is based on a personal Disney Parks experience. No two experiences are alike, and this article does not necessarily align with Inside the Magic’s personal views on Disney Park operations.