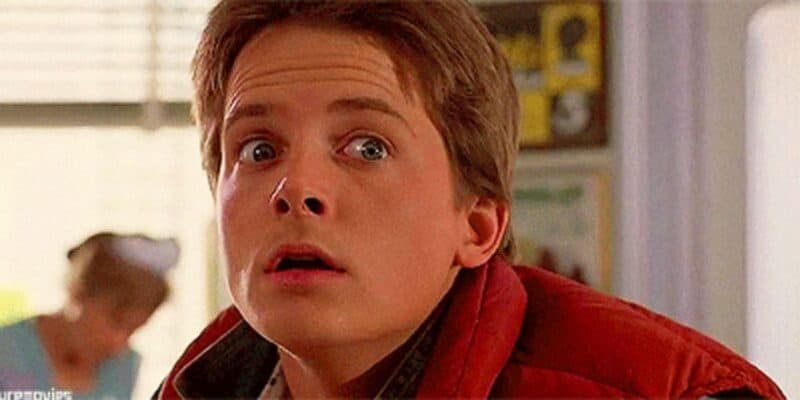 Last year was a busy one for Back to the Future. Rumors of a new film, whether a reboot, sequel, or an animated series, reached new heights, while Michael J Fox (Marty McFly) and Christopher Lloyd (Doc Emmett Brown) shared an emotional reunion at the New York Comic Con.

And then the pair, who were already busy fuelling rumors of a “gender-swap” reboot, were also promoting an online Back to the Future merch shop. And all the while, Back to the Future: The Musical continued to take London’s Adelphi Theater “back in time”.

Christopher Lloyd, 84, even made an appearance in a new trailer for the musical — to promote the production’s relocation to Broadway in New York City later this year — in which he “passes the torch” to the Doc Emmett Brown brilliantly performed by Roger Bart.

Back to the Future: The Musical continues to sell out the Adelphi Theater in London’s West End. However, it will soon be heading over Broadway’s Winter Garden Theater in New York City.

Olly Dobson recently portrayed Marty McFly (the resemblance was uncanny), however, neither Dobson or Joyce will transfer over to the Broadway version of the show this year, although Roger Bart is expected to reprise his role as Doc Emmett Brown.

And lastly, before 2022 was over, iconic actor and Parkinson’s Disease activist Michael J Fox went on to receive an honorary Oscar from the Karolinska Institute for his advocacy of a cure for the disease.

Now, Back to the Future co-writer Bob Gale has spoken with Express.co.uk about a Back to the Future virtual reality experience, revealing that someone created such a game for him to try out. While it’s in no way an official title, Gale talked about how immersive it was, while also comparing it with the idea of a live-action reboot/sequel, saying:

“I put the goggles on and I was walking around the town square of Hill Valley in 2015. It wasn’t detailed yet but I could go into Cafe ’80s, all the decor was on the walls, and I could walk out and walk around the courthouse pond. I could see that as an immersive environment as a way of continuing Back to the Future-ness without upsetting the core trilogy of the movies. I can see it being used with that kind of technology.”

It seems that Gale is far more comfortable with the idea of Back to the Future (1985) being reimagined in the form of a VR experience than a film. The writer and producer famously went on record years ago to condemn the idea of a reboot to the beloved 1985 classic, likening a fourth film to “selling your kids into prostitution”, while adding that Michael J Fox would be unable to perform as Marty McFly due to the effects of his Parkinson’s disease.

Would you like to see a Back to the Future virtual reality experience? Let us know in the comments down below!