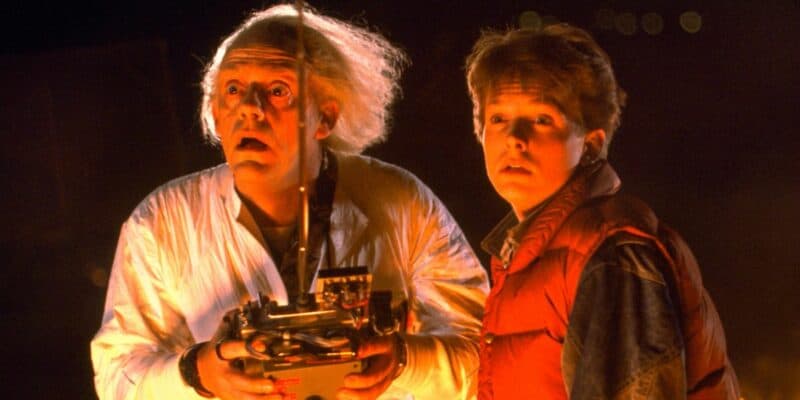 Great Scott! Back to the Future is reportedly back, well in the future.

Throughout the years, many fans have shared rumors of a reboot for the franchise. Both Michael J. Fox and Christopher Lloyd have remained close in their relationships, and both have pitched ideas for what a reboot could look like if the franchise wanted to go down that road.

However, there simply hasn’t been a major push from Universal Pictures to remake the beloved films. That is, until now.

According to reports from Giant Freakin’ Robot, it seems that there may finally be an idea on the table for what is next for the franchise.

The report indicates that an animated series, which will be a continuation of the franchise, is coming to Netflix.

“There are few details currently available for what the Back to the Future Netflix animated series might involve, plot-wise, but when your protagonists have access to essentially all of time and space, there are few limits to what it could be. The original trilogy exclusively focused on the adventures of Marty McFly (Michael J. Fox) and Emmett “Doc” Brown (Christopher Lloyd) and their attempts to alternately change events or get them back to the way they once were. But just because Back to the Future has usually focused on the McFly family doesn’t mean it has to be about Marty this time.”

While this isn’t out of the question– and there actually was a TV series in the early 1990s based on Back to the Future for just a year– there are some questions as to what this would actually entail. In addition, it would be peculiar for Universal to give Netflix the rights to make an animated series when it is trying to build its own streaming platform in Peacock.

What did you miss in Back to the Future?

The first movie of the franchise sees Marty McFly wind up in the 1950s after accidentally activating the Flux Capacitor attempting to escape the clutches of Libyan terrorists, who killed Doc Brown in 1985. Marty runs into his father George and mother Lorraine, and as a result, sets off the space time continuum as we know it.

With the help of the 1955 version of Doc Brown, the two formulate a plan to get him back to the future, using lightning from the iconic clocktower as a way to generate the needed power to re-activate the Flux Capacitor. Marty is able to get his parents back together and even helps give his father the confidence he needs to stand up to bully Biff Tannen, which creates an amazing alternate reality when he arrives back in 1985.

The second movie focuses on Grays Sports Almanac. As Marty and Doc, along with Marty’s girlfriend Jennifer, travel into the future to help change the future of their children, Marty buys a Sports Almanac, which he thinks can give him all the knowledge he needs to win at sports betting. Doc Brown finds out and discards of the Almanac, but the two are unaware that elderly Biff was listening.

He takes the Almanac back to November 1955 and gives it to his younger self, which creates an alternate timeline where Biff is now powerful and married to Marty’s mother. The two embark on a journey back to 1955 to stop get the Almanac from Biff, but after successfully completing the mission, Doc Brown is struck by lightning inside the time machine and transported back to 1885.

The final chapter of the trilogy sees Marty go back to 1885 to try and save Doc Brown, who is in imminent danger of Buford ‘Mad Dog’ Tannen. Doc is now a Blacksmith and the two formulate a plan to get the time machine– which is now depraved of gas– moving by stealing a train and pushing the time machine until it hits the needed 88 mph. Doc falls in love with a teacher, Clara Clayton, and after some close calls, Marty McFly is transported back to 1985, and Doc ultimately elects to stay behind.

The final scene of the trilogy shows Doc Brown appearing to Marty and Jennifer in a newly-built Time Machine, this time out of a train, with Clara and two little boys. He declares that “the future is what you make it!” and Marty is able to shake his feelings of having to prove that he’s “not chicken” when he backs out of a street race, which would’ve ended with him getting in a car accident.

What do you think of a potential Back to the Future television series? Let us know in the comments!