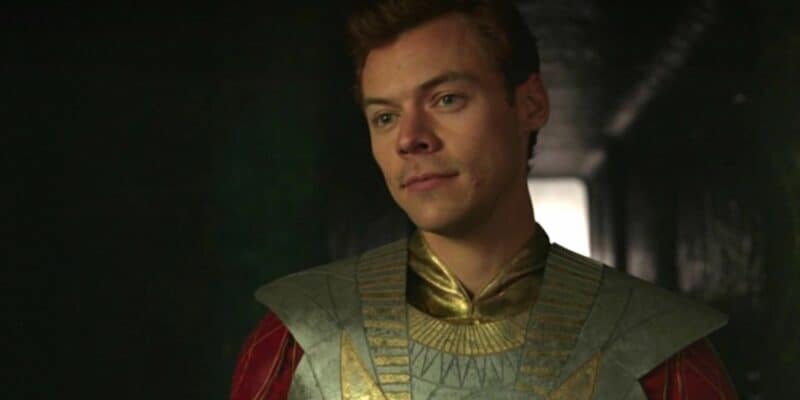 Harry Styles might not have known that the character he was playing was known to be a sexual predator, which is the character’s creator, and he is worried Eros won’t get much screen time in the MCU.

Eternals (2021) feels like a distant memory in the MCU since it was released awkwardly between two stellar MCU movies, Shang Chi and the Legend of the Ten Rings (2021) and Spider-Man: No Way Home (2021). Now that Phase Four is nearly at an end, fans may have forgotten about the post-credit scene in Eternals that made every One Direction fan lose their mind.

Yes, Harry Styles is part of the MCU as Thanos’s brother, and his role in the Marvel Cinematic Universe is undecided. In the comics, his character helped resurrect the Mad Titan due to his deep love and admiration for the villain as his brother, but Marvel might take a different approach.

At the moment, fans know the Eternals will return, but it’s unclear when that will be or if they have a large role in the MCU. Styles could be sticking around with the Eternals crew or simply showing up elsewhere.

While Patton Oswalt did accidentally confirm an Eternals sequel, it’s hard to know when that movie will release due to Marvel already planning out movies all the way into 2024. For all we know, Eros might skip a phase or two before returning to the Marvel universe.

In an interview with Inverse, Jim Starlin discussed how Eros might be tricky to adapt to the MCU due to his controversial past:

“Eros, on the other hand, he’s an interesting one. I have no idea what they’re going to do with him. I sort of left him as a sociopath, and he is sort of a sexual predator. So I’ll be curious to see how the MCU Eros fares up against the other one. Especially in this day and age. So that’s always a tricky one.”

With this in mind, Harry Styles’s Eros will probably end up being a lot different to avoid creating some controversies with fans since no one wants to see Harry Styles act as a sexual predator in an MCU movie. Still, it’s very interesting that Marvel is bringing in the one character responsible for resurrecting Thanos so soon.

Perhaps fans will get to see more of Eros in the next few years and decide how they feel then, but the actor/singer hasn’t done a whole lot in the MCU to give us a good understanding of how different the character will be in the movies.

Do you think Marvel will change up Eros in the MCU? Let us know what you think!