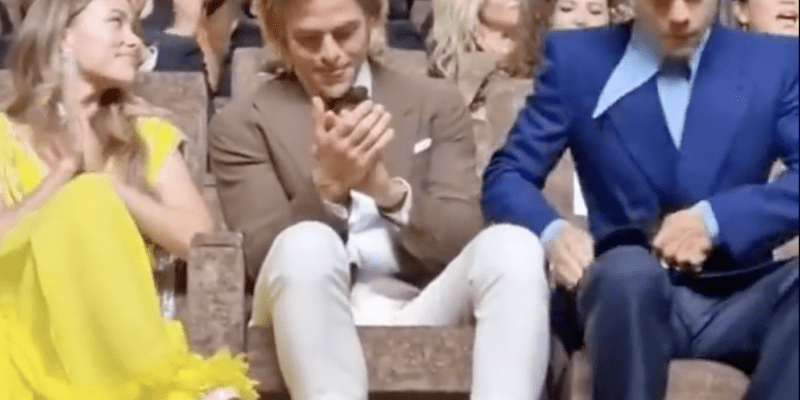 The firestorm surrounding Olivia Wilde’s upcoming film Don’t Worry Darling, which is set to release on September 23, may never be matched. The film boasts some big stars, with powerhouse Florence Pugh (Midsommar, Black Widow) and world-renowned singer Harry Styles of One Direction fame headlining the film.

Their relationship and on-screen chemistry in the movie is key, as it pairs both Harry and Florence together as a couple. The film also features Chris Pine (Wonder Woman, Star Trek) as well as director Olivia Wilde, who made her directing debut with the 2019 film Booksmart.

Earlier this year, people started questioning if things were murky on set after rumors swirled about Pugh having a falling out with Wilde. More rumors started to come out claiming that Pugh may possibly ditch the film’s premiere as well as all future press junkets. A video leaked last week of Wilde speaking to Shia Labeouf, who was originally cast in the movie and working alongside Pugh.

Pugh reportedly had issues working with Labeouf, who was later accused of abuse by former partner Tahliah Debrett Barnett, more commonly known as FKA twigs, an artist, singer, and songwriter. Barnett is now filing a lawsuit against the actor.

Pugh was absent for the panel before the screening at the Venice Film Festival but did make an appearance later that night.

To add to the already-boiling drama, a video went viral that appears to show Harry Styles spitting on Chris Pine while the cast was attending the Venice Film Festival just a few days ago.

The video can be seen below, accompanied by a much more plausible reason Chris Pine looked so perplexed:

Chris pine just wondered where his sunglasses were after the applause. And he zoned out (likes he’s been doing all day) and realised it’s in his lap. So I am sorry to say harry styles did not spit on him.

Chris pine just wondered where his sunglasses were after the applause. And he zoned out (likes he’s been doing all day) and realised it’s in his lap. So I am sorry to say harry styles did not spit on him. pic.twitter.com/7b4GoCvnHJ

As you can see, as Styles makes his way to his seat next to Pine, Styles bends over. As soon as this happens, Pine looks confused and gives a somewhat unsurprised reaction while looking down at his pants.

Many have come to the same conclusion as the tweet above, claiming that Pine was just looking for his sunglasses, but the video is strange regardless, especially considering all of the drama surrounding the movie itself.

Despite rumors and theories claiming Styles intentionally hocked a loogie at Pine, a representative for Pine is now issuing a statement that dismisses the whole ordeal.

“There is nothing but respect between these two men and any suggestion otherwise is a blatant attempt to create drama,” a rep for Chris Pine tells PEOPLE. The representative claims that this story is “ridiculous, a complete fabrication and the result of an odd online illusion that is clearly deceiving and allows for foolish speculation.”

“Just to be clear, Harry Styles did not spit on Chris Pine,” the rep continues. “There is nothing but respect between these two men and any suggestion otherwise is a blatant attempt to create drama that simply does not exist.”

A rep for Styles has not commented on the story.

Have you been keeping up with all of the drama surrounding this film?