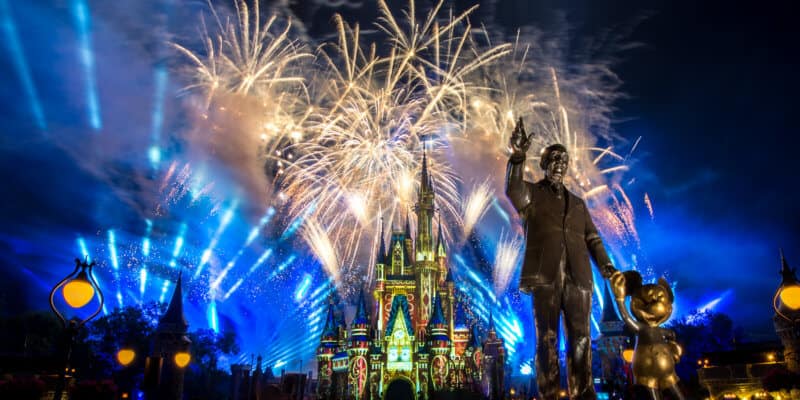 Last year, Disney Parks shocked fans when it announced the beloved Happily Ever After would “sparkle into Disney history”. Sure, it was known that a new nighttime spectacular would be taking over Cinderella Castle and Main Street, U.S.A. for Magic Kingdom’s 50th anniversary, but a full retirement caught many off guard.

However, after multiple teases, Walt Disney World will officially welcome Happily Ever After back very soon!

The Walt Disney World Resort in Orlando, Central Florida attracts millions of Guests each year. And each and every Guest will visit the theme parks for a different reason — the food, the merchandise, the attractions –, but one thing that draws the crowds: the nighttime spectaculars.

When Disney Parks announced that Wishes: A Magical Gathering of Disney Dreams would be retiring from its nighttime slot at Magic Kingdom Park, many were distraught and skeptical about the future of the Resort’s premiere fireworks show. Then Happily Ever After debuted. Of course, some were critical — it wasn’t Wishes, and yes, nothing ever will be Wishes — but Happily Ever After successfully combined the nostalgia of its predecessor, the projection-mapping technology of the former pre-show, Celebrate the Magic, and added a distinct Disney flair that brought hundreds to tears.

Flashforward to October 1, 2021, and Happily Ever After’s replacement — Disney Enchantment — would get a lukewarm reception when it debuted for The World’s Most Magical Celebration with criticisms at its lack of nostalgia, its use of covers as opposed to the original versions of Disney songs that so many fans adore, and for its less than spectacular fireworks. It has grown on some though, and the recent addition of Walt Disney and Roy Disney during the show softened the edges of what felt like a somewhat cold celebration for the Disney Resort’s half centennial.

As we near a year since the 50th anniversary began, fans of the Disney Park are wondering what Disney will do with Enchantment when the event ends next year. In addition to staying quiet about nighttime events, including those at Disneyland Resort, “Happily Ever After” singer Jordan Fisher started theories when he posted a cryptic video referencing the fan-favorite spectacular, and all signs seemingly pointed to news coming from D23 Expo 2022.

And they were right.

The news of Happily Ever After’s return came amid a flurry of other announcements during the coveted panel at D23 Expo, and it looks to be an exciting future ahead for the Disney Parks brand.

The replacement of Happily Ever After was just one of the changes that came for the Park’s celebration. Disney Genie+ and Lightning Lane debuted, as did the announcement that Park Pass reservations were staying until at least 2024. As experiences change, and paywalls become the norm, the return of a familiar favorite may temper some frustrations.

Are you looking forward to the return of Happily Ever After? Let us know in the comments down below!