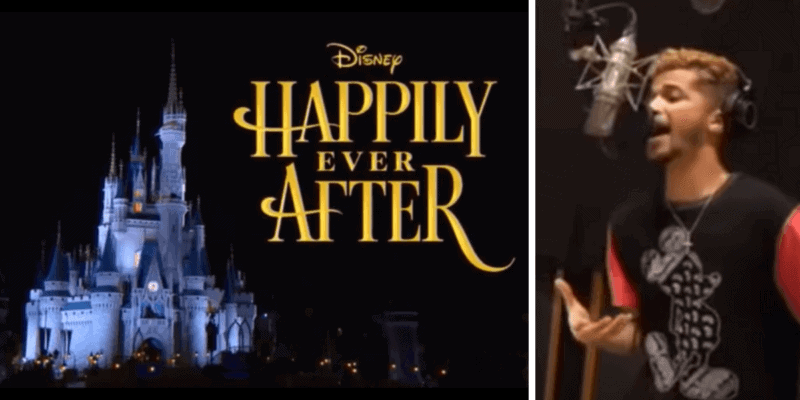 Jordan Fisher has spent the last few weeks speaking out about his nostalgia for the Happily Ever After fireworks show at Magic Kingdom at Walt Disney World Resort. The beloved show was retired in September 2021 and replaced with Disney Enchantment.

Though fans were uncertain when Happily Ever After replaced Wishes: A Magical Gathering of Disney Dreams as Magic Kingdom’s official Cinderella Castle firework show in 2017, it quickly touched the hearts of Disney Parks Guests. Some Walt Disney World fans were hopeful that Enchantment would have a similarly positive reception, but unfortunately, many were disappointed. A few devoted Disney Parks fans even started a petition to bring back Happily Ever After.

Fisher co-sung the song “Happily Ever After” with Angie Keilhauer for the Magic Kingdom nighttime spectacular. He’s posted Tweets, TikToks, and Instagram stories begging The Walt Disney Company to bring Happily Ever After back:

Amid rumors of the show’s return, one Disney Influencer (@Schmoofy) speculates that Fisher is being paid to promote Happily Ever After ahead of September’s D23 Expo – where major Disney Park announcements are usually made:

definitely not planned hype by Disney PR is any way before D23, nope

definitely not planned hype by Disney PR is any way before D23, nope https://t.co/znQLErlPJn

Fisher hasn’t disclosed if any of his videos or posts about Happily Ever After at Walt Disney World Resort are advertisements. Inside the Magic will report any news about the nighttime spectacular’s rumored return to Magic Kingdom!

If you’re missing Happily Ever After, check out Disney Enchantment – special for Walt Disney World Resort’s 50th Anniversary. From Disney:

Behold a brand-new nighttime fireworks spectacular that empowers you to believe in yourself and in magic.

Would you like to see Happily Ever After return?