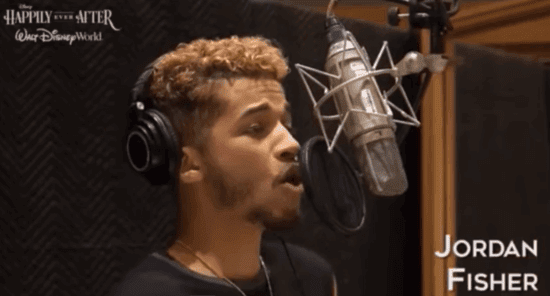 Best known in the Disney community for his roles in Disney Channel’s Liv and Maddie (2015-2017), Star Wars: Visions (2021), and Pixar’s Turning Red (2022), Jordan Fisher co-sang the iconic Walt Disney World firework spectacular song, “Happily Ever After”, for the show of the same name.

Fans remember Happily Ever After as a beloved nighttime show casting gorgeous projections and countless fireworks over Magic Kingdom’s Cinderella Castle. The show ran most nights from 2017 until 2021 before its replacement took over, to some fans’ dismay. Disney’s Enchantment, which debuted at Magic Kingdom as part of the ongoing 50th anniversary celebrations, has been running ever since.

It’s been almost a year since Guests have been able to witness Happily Ever After in real-time at the Magic Kingdom, and fans still aren’t over it. Some even started a petition to bring the show back, which has almost 10,000 signatures to date.

The show featured an original song performed by Jordan Fisher and Angie Keilhauer. Disney Parks still features a recording of the tune on their official YouTube channel:

Clearly, Jordan Fisher aligns with the many who once again wish to hear his voice echoing throughout Main Street U.S.A., as today, he Tweeted, practically asking Disney for a revival.

“Cry with me,” Disney star Jordan Fisher Tweeted with a YouTube link to a previously recorded showing of Happily Ever After:

Today isn’t even the first time he asked for a revival. In a video reposted by TikTok user @waltdisneyworldparks, Jordan is heard asking “shouldn’t it come back?” with the “Happily Ever After” tune playing in the background.

TikToker Making Main Street shared a similar sentiment in posting a special video performance on behalf of her daughter, who sang every piece of the fireworks show, commentary and all, with a piano accompaniment.

PLZZZZZ help us get this to @Jordan Fisher ❤️ This baby is singing his special song that she loves so so much, and i know is one of his most faves ever too✨ Happily Ever After nerds Forever 🎉🥹 #happilyeverafter #jordanfisher #disneysongs #waltdisneyworld #disneyworld #disneynighttimespectaculars #disneyshows #disneyworldshows #wdwap #wdwtiktok

PLZZZZZ help us get this to @Jordan Fisher ❤️ This baby is singing his special song that she loves so so much, and i know is one of his most faves ever too✨ Happily Ever After nerds Forever 🎉🥹 #happilyeverafter #jordanfisher #disneysongs #waltdisneyworld #disneyworld #disneynighttimespectaculars #disneyshows #disneyworldshows #wdwap #wdwtiktok

Jordan has always been vocal about his love for the show, sharing the impact it had on his life on his Instagram.

To Our Happy Place…

On the final night of our show I’m reminded of all the memories and magic you’ve given us. Thank you for letting Happily Ever After (and even little old me) be a small part of yours. 💜🎆

As of today, Disney has not yet hinted at a Happily Ever After revival. Inside The Magic will bring you all the updates should they decide to give the fans what they want, Jordan Fisher included!

Do you want to see a Happily Ever After revival at Walt Disney World? Tell us in the comments below!