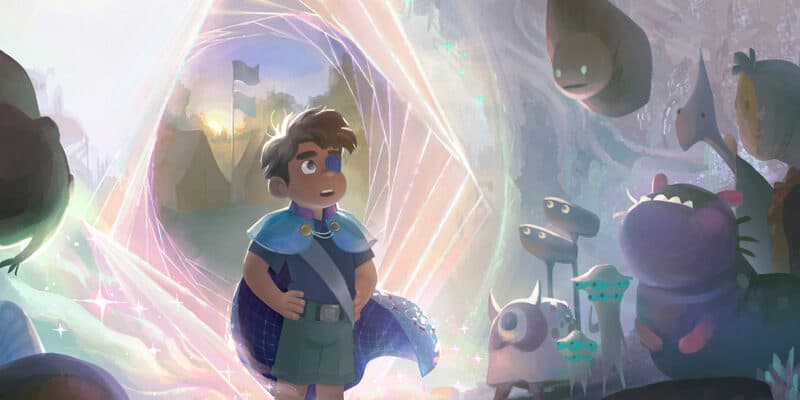 A brand-new story from Disney and Pixar was just announced! Join Elio on an intergalactic adventure coming soon!

Some of the announcements have included the long-awaited Hocus Pocus (1993) sequel, Hocus Pocus 2 (2022), coming to Disney+ later this month, and the popular sequel Disenchanted (2022), also making its way into Disney’s streaming platform later this year. Fans have also been able to get a first look at so many exciting new projects like Win or Lose, Pixar’s first full-length series, Iwájú, Walt Disney Animation Studios’ first-ever collaboration with Kugali Media, and a breathtaking original story to celebrate the 100th anniversary of The Walt Disney Company, Wish.

Yet another upcoming story is Elio. Disney D23 (@DisneyD23) posted a first look at the upcoming project, with stunning visuals that will surely enchant viewers.

Disney and Pixar’s newest adventure will take viewers on an intergalactic journey with Elio. Per Disney:

Meet Elio: A boy who finds himself transported across the galaxy & mistaken for the intergalactic Ambassador for our planet Earth.

This brand-new project will star America Ferrera as Olga Solis and Yonas Kibreab as Elio. Disney and Pixar’s ELIO will be Directed by Adrian Molina & Produced by Mary Alice Drumm. This intergalactic adventure lands in Spring 2024.

Inside the Magic will update you as more information comes to light regarding this all-new project. ITM will also bring you all the information that will continue to be released during this year’s D23 Expo, “The largest Disney fan event in the world,” including the latest projects from Disney, Pixar, Marvel, LucasFilm, Disney Parks, and so much more!

Related: Tribute to Br’er Rabbit Will NOT Remain on Tiana’s Bayou Adventure

So far, we’ve seen exciting news, including a breathtaking 16-feet-tall statue coming to EPCOT’s Moana-inspired attraction, a first peek at the upcoming Splash Mountain retheme as Tiana’s Bayou Adventure, and even an all-new restaurant inspired by Disney´s The Princess and the Frog (2009) coming to Disneyland Resort.

Are you excited about ELIO, Disney and Pixar’s latest collaboration? Let us know in the comments below!