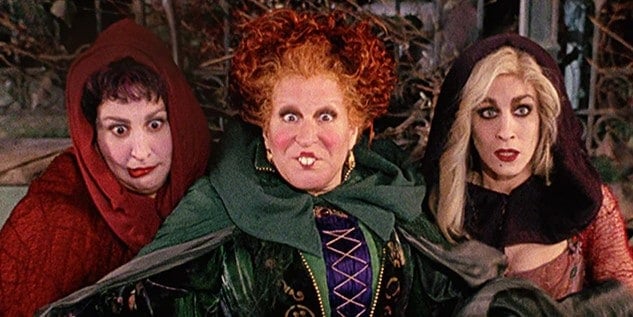 Amuck, amuck, amuck! The Sanderson Sisters return in an all-new trailer for Hocus Pocus 2 (2022), streaming on Disney+ on September 30:

The trailer, shared at D23 Expo, is the first official trailer since a teaser in June. Disney also shared an all-new poster for the highly-anticipated sequel:

As we previously reported, the plot for Hocus Pocus 2 centers around three high-school students who accidentally light the Black Flame Candle once again. We also got a look at Winfred, Sarah, and Mary as teenagers 370 years ago. From Disney:

It’s been 29 years since someone lit the Black Flame Candle and resurrected the 17th-century Sanderson sisters, and they are looking for revenge. Now it is up to three high-school students to stop the ravenous witches from wreaking a new kind of havoc on Salem before dawn on All Hallow’s Eve.

Need a refresher before your Hocus Pocus 2 movie night? From Disney Plus:

“You’re in for a devil of a time when three outlandishly wild witches—Bette Midler, Sarah Jessica Parker and Kathy Najimy—return from 17th-century Salem after they’re accidentally conjured up by some unsuspecting pranksters. It’s a night full of zany fun and comic chaos once the tricky 300-year-old trio set out to cast a spell on the town and reclaim their youth…but first they must get their act together and outwit three kids and a talking cat.”

Are you excited about Hocus Pocus 2?