Why was I cursed with such wretched sisters?! Just lucky, I guess! The Halloween hit Hocus Pocus debuted in 1993, and ever since it was released on home video a few months later, has grown to a household-name level of popularity. The Sanderson sisters are coming back once more to bubble their cauldron in Hocus Pocus 2, releasing in the fall of 2022.

If you’re running amuck waiting for this Hocus Pocus sequel to release, keep reading for all the witchy details on our favorite Salem sisters!

Hocus Pocus 2: Everything We Know 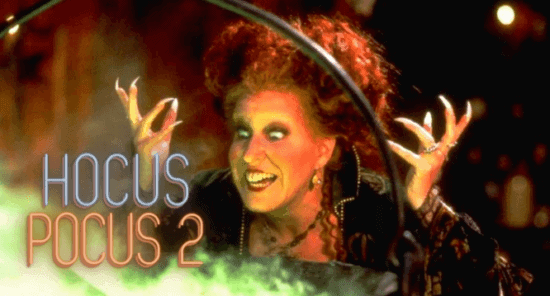 After first being announced in December of 2020, Disney confirmed that Hocus Pocus 2 was indeed underway, with scripts from Jen D’Angelo (Workaholics) and producers Lynn Harris (King Richard), executive producer Adam Shankman (Disney’s Disenchanted), and crew from the first installment, Ralph Winter (Hocus Pocus), and David Kirschner (Hocus Pocus) serving as executive producer. It’s nice to know there are original creators helping out director Anne Fletcher with this sequel!
Disney fans were thrilled to hear all the details coming from an official Disney+ press release about the Hocus Pocus 2 plot! According to this October press release from Disney+, Whitney Peak will star as Becca, Lilia Buckingham will pose as Cassie, and Belissa Escobedo will play Izzy. These three young women live in modern-day Salem and incite the wrath of the three child-hungry witches after lighting the black flame candle.

More details are filled in by speculation from IllumiNerdi: Becca is an aspiring witch who manages to get her hands on a new dark flame candle at the town’s magic shop located in the Sanderson Sisters’ old cottage. Along with her classmate “Izzy,” a confident oddball, Becca mistakenly summons the Sanderson Sisters on Halloween night, leading to chaos in the town as the girls race to find a way to stop the witches who still seek youth and immortality.

And it looks like the sisters will not only come across Becca and Izzy, but “Giles” the owner of the magic shop in their former home, “Sam” a classmate of the girls and magician who works at Giles’ magic shop who also has a crush on Becca, and Becca’s kind and cheerful stepmother “Luann” who is an outsider in her own right.

Some avid Hocus Pocus fans may know about the Disney Book that extended the original screenplay into a novel and sequel form. In this New York Times bestseller,  Max and Allison marry and have a child named Poppy. Poppy is 17-years-old when she encounters the Sanderson Sisters and needs to fight them off on Halloween night, just like her parents did. This storyline brings back the witches for another night of mischief and continues the Max/Allison storyline. While we now know the plot of Hocus Pocus 2 will not follow Max or Allison, it does seem that Poppy’s story is eerily similar to the existing synopsis of the sequel film. The official Disney Books account shares more about the novel:

What are you reading this month? 🌙🕯✨
Search for Hocus Pocus & the All-New Sequel on DisneyBooks.com. Link in bio or tap on the tag in the photo to shop. About the Book:

Hocus Pocus is beloved by Halloween enthusiasts all over the world. Diving once more into the world of witches, this electrifying two-part young adult novel, released on the twenty-fifth anniversary of the 1993 film, marks a new era of Hocus Pocus. Fans will be spellbound by a fresh retelling of the original film, followed by the all-new sequel that continues the story with the next generation of Salem teens.

Shortly after moving from California to Salem, Massachusetts, Max Dennison finds himself in hot water when he accidentally releases a coven of witches, the Sanderson sisters, from the afterlife. Max, his sister, and his new friends (human and otherwise) must find a way to stop the witches from carrying out their evil plan and remaining on Earth to torment Salem for all eternity.

While Hocus Pocus 2 will not be filming in Salem, the production will stick to the Northeast and shoot in Rhode Island. A realistic (only from certain filming angles) old Salem village set has been constructed on the Chase Farm property, and looks fairly convincing! As of the first week of November, filming was seen happening on the village set.
A viral video shows townspeople grabbing each other and shrieking as Winifred herself steps out of a house. It appears that the villagers are none too happy, either. @baniabvr has another video of three little girls dressed as Winnie, Mary and Sarah, frolicking on the lawn between takes. It looks like we will be getting some witch backstory, too!

It was said that Hocus Pocus 2 could never take place (and wouldn’t be the same!) if the original Sanderson sisters did not return. Fortunately, all three actresses agreed that the sequel would be a lot of fun and Disney penned Bette Midler (Winifred), Kathy Najimy (Mary), and Sarah Jessica Parker (Sarah) with great excitement.
What we don’t know is if Max (Omri Katz), Dani (Thora Birch), or Allison (Vinessa Shaw) will have cameos as the delicious characters or be involved at all. With Binx’s (Sean Murray) spirit finally free and his cat body dead, it’s unlikely we will see or hear from our favorite black feline.  We can also expect recent Emmy winner Hannah Waddingham to be involved in an unknown capacity (perhaps she will play Luann?), and crowd favorite Doug Jones also returns to the Hocus Pocus 2 cast as the undead zombie and Winnie’s ex-lover, Billy Butcherson.
Toy Story 4 actor Tony Hale (Forky) will be on board for the witchy sequel,  as well as Veep star Sam Richardson. Director Anne Fletcher says of the upcoming Hocus Pocus sequel, “Fans around the world have embraced these characters and have made this film a Halloween tradition whose popularity continues to grow, and how lucky am I to be back at Disney with these three extraordinarily talented ladies in the iconic roles they created, as well as our fabulous new additions to the cast?”

The Halloween film is scheduled to release exclusively on Disney+ in the fall of 2022, with no expected theatrical run. However, Disney may change plans and release the at-home and in-theater versions at the same time, or could drastically change viewer expectation and run Hocus Pocus 2 as a Premier Access offering for an additional cost. Stay tuned for more information about the Hocus Pocus 2 release date and the festivities surrounding the fall debut.

Will you be tuning in to Disney+’s Hocus Pocus 2 next fall? Leave us a comment below!

Comments Off on ‘Hocus Pocus 2’: Everything We Know