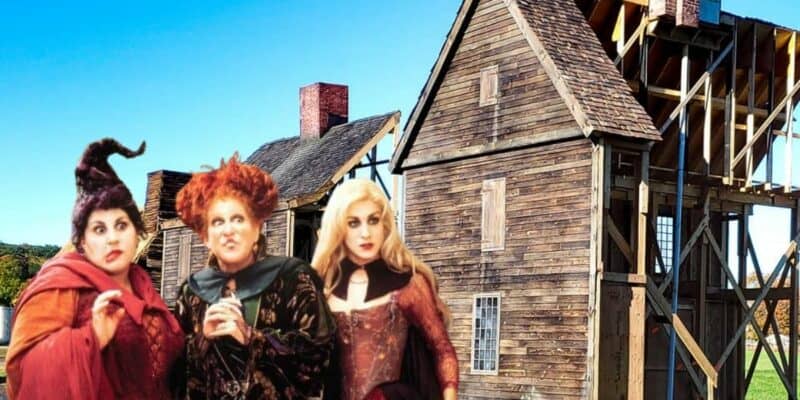 It’s just a little Hocus Pocus… 2!! The growing set in northern New England grows to a small village and only seems real from certain sides. Photographer Luna Moon Gothic was on hand to see the Hocus Pocus 2 (2022) set from various, close-up angles giving us a sense of the Salem-esque village combined with Disney’s famous movie magic.

We know from previous reports that Hocus Pocus 2 will not film in Salem, Massachusetts like the original titular film, but in Rhode Island on the Chase Farm Park property. Per the Boston Globe,

Multiple reports this week said production had begun building 1600s-era movie sets in Chase Farm Park in Lincoln, where much of the second film will reportedly be shot. Production also has been securing permissions from town officials and law enforcement on things like controlled burns for certain scenes, according to the Providence Journal.

Filmmakers are also making use of historic buildings like the Cranston Street Armory in Providence that will reportedly be a soundstage, according to Rhode Island NBC affiliate WJAR. An executive director of the Rhode Island Film & Television office told the news outlet that Disney is paying for “intensive cleanup” of the facility as well as all utilities. He called the production “a very net gain for the state of Rhode Island.”

We are finally seeing the fruits of the scenic crew’s labor, in early set shots from Instagram users and those walking through the area. Photographer and gothic jeweler Luna Moon Gothic found themselves on the set of the new Disney+ Hocus Pocus (1993) sequel, which will star all three of the original Sanderson Sisters, Bette Midler (Winifred), Sarah Jessica Parker (Sarah), and Kathy Najimy (Mary). The beloved stars will be reprising their roles, while the script is being developed by Jen D’Angelo and Anne Fletcher will be the director at the helm.

Luna Moon Gothic snapped very closeup and detailed photos of the Salem village as it has been constructed, but what we see now is the village is meant to be shot from certain angles, allowing the structures to be merely facades instead of whole houses.

Other set elements like greenery, gardens, rail fences, and full chimneys pepper the set to give more reality to the 1600s-based village.

These windows on the Tudor era homes are classic New England style, and would be welcome in any witch’s home!

As you can see the village takes shape from one angle in Chase Farm Park, using the existing forest as a backdrop and allowing light screens and candles to be used in the windows for dramatic effect.

However, when a user stands on the opposite side of some buildings, the creative use of space and materials reveals that the set artisans only created half houses to be shot from the other vantage point.

One especially enchanting addition to the village is a Corwin House-inspired home taking notes from the Salem village. While Winnie’s house itself was created and destroyed for the initial installment of Hocus Pocus, the famous Halloween movie didn’t use Massachusetts’s famous “Witch House” originally owned by Judge Corwin.

An inspired, yet not the exact, version of this house is now being built for the film, taking notes from the cantilevered door front and artfully placed windows. We don’t know yet how this structure will be used, but we are eager to find out in 2022!

Crews have also started purchasing items from local antique shops in the area, most likely to flesh out these villages and other scenic pieces filming on the local sound stages. “Old School New England” wares like lamps, jars, pumpkins, and shades have already been collected by the crew.

Of course, all this pre-production occurs before filming begins, and while Disney has not announced when the Hocus Pocus sequel will begin filming, the film is currently looking to cast a number of New Englanders as extras. The spooky sequel, Hocus Pocus 2, is scheduled to be released on Disney+ in Fall 2022.

Will you be catching this evil spell next year on Disney+? Leave us a comment below about what you think will become of the Corwin Witch House replica!