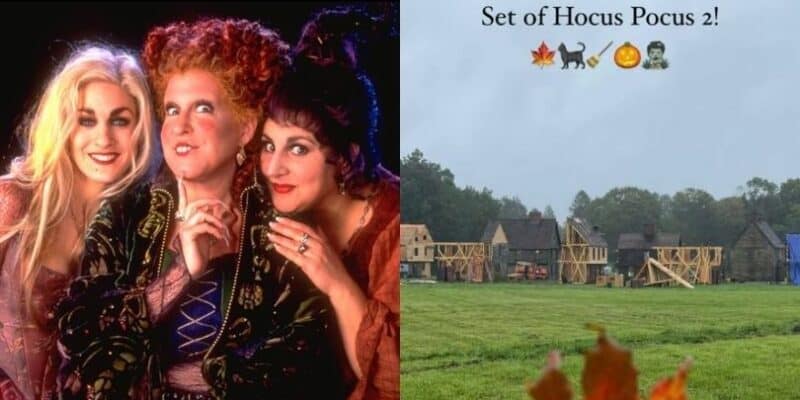 Kiel James Patrick (@kjp) and his wife, Sarah Vickers (@sarahkjp) are best known as the duo behind the Kiel James Patrick clothing and accessory brand. The duo is also quite popular on Instagram — they share nearly 1.6 million followers — where they showcase their aspirational New England lifestyle alongside their son, Harris James.

Recently, Kiel and Sarah were out for a walk and stumbled upon the set for the upcoming Disney sequel, Hocus Pocus 2! Both of the Instagrammers shared photos of the spooky set to their Stories.

Sarah captioned one image, “Rainy morning walk to sneak a peek at the set of the new Hocus Pocus set [sic: movie].”

Kiel reshared one of Sarah’s TikTok posts to Instagram. The short video was captioned, “Disney is building an entire village for Hocus Pocus 2 right down the road from us!”

He also shared a picture that gives the best view of the set that is currently being erected for the upcoming movie. Fans of the Hocus Pocus franchise are sure to be thrilled to see this Salem-like village coming to life right before their eyes.

Although few details are known about the plot of the Hocus Pocus sequel film, one idea could have been revealed in an October 2020 Disney Books Instagram post about Hocus Pocus & the All New Sequel:

The core trio of Salem witches — Sarah Jessica Parker (Sarah Sanderson), Bette Midler (Winifred Sanderson), and Kathy Najimy (Mary Sanderson) — are all onboard for Hocus Pocus 2, which is due to hit the Disney+ streaming platform in Fall 2022.

Related: ‘Hocus Pocus 2’ Casting Call: YOU Can Be in the New Movie!

Are you looking forward to Hocus Pocus 2?