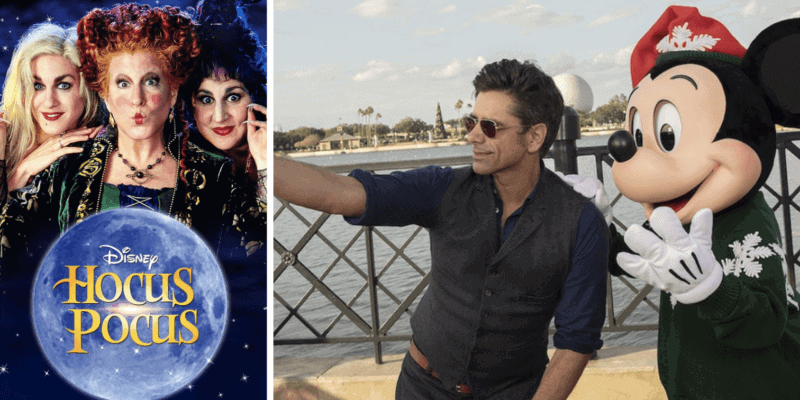 The original Hocus Pocus (1993) movie has a cult following that comes out in full force this time of year. Even though the Sanderson sisters might be horrified by the commercialization of modern Halloween, that doesn’t stop fans from snapping-up every bit of Hocus Pocus merchandise they can grab.

This year has been an especially good for for fans of the franchise, with all three original stars — Better Midler (Winifred), Sarah Jessica Parker (Sarah), and Kathy Najimy (Mary) — expressing interest in returning for a Hocus Pocus 2 sequel in the near future!

Though right now a second movie has not actually been yet confirmed, Bette Midler did confirm that the Hocus Pocus cast would be reuniting for a virtual reunion event called “In Search of the Sanderson Sisters: A Hocus Pocus Hulaween Takeover”.

So who else will be appearing in the virtual event? Well, as per a ComicBook.com report, Midler has let it slip that John Stamos — who is known for being a big Disney fan alongside his wife, Caitlin (@CaitlinSkybound on Instagram) — will be appearing as a “handsome devil” in the upcoming project:

Midler dropped the surprising news that John Stamos would appear in the project as a character she affectionally refers to as a “handsome devil.”

This makes it sound like Stamos will be playing the role originally fulfilled by comedy filmmaker Garry Marshall. The actor starred alongside his sister Penny Marshall as a married couple, with him dressed in a devil costume and convincing the Sanderson Sisters that he’s the real deal.

Related: Everything We Know About ‘Hocus Pocus 2’ So Far

So what about a Hocus Pocus 2? Well, few concrete details are currently known about the plot of the possible second installment in the Hocus Pocus franchise, one idea could have been revealed in a Disney Books Instagram post about Hocus Pocus & the All New Sequel, which released earlier this month:

What are you reading this month? ??✨ . Search for Hocus Pocus & the All-New Sequel on DisneyBooks.com. Link in bio or tap on the tag in the photo to shop. . About the Book: Hocus Pocus is beloved by Halloween enthusiasts all over the world. Diving once more into the world of witches, this electrifying two-part young adult novel, released on the twenty-fifth anniversary of the 1993 film, marks a new era of Hocus Pocus. Fans will be spellbound by a fresh retelling of the original film, followed by the all-new sequel that continues the story with the next generation of Salem teens. Shortly after moving from California to Salem, Massachusetts, Max Dennison finds himself in hot water when he accidentally releases a coven of witches, the Sanderson sisters, from the afterlife. Max, his sister, and his new friends (human and otherwise) must find a way to stop the witches from carrying out their evil plan and remaining on Earth to torment Salem for all eternity. Twenty-five years later, Max and Allison’s seventeen-year-old daughter, Poppy, finds herself face-to-face with the Sanderson sisters in all their sinister glory. When Halloween celebrations don’t quite go as planned, it’s a race against time as Poppy and her friends fight to save her family and all of Salem from the witches’ latest vile scheme. – #bibliophile #booknerd #bookworm #reading #booklove #bookphotography #hocuspocus #sandersonsisters #halloween #yabooks #yareads

Are you excited to hear that John Stamos will be appearing in the upcoming virtual reunion?