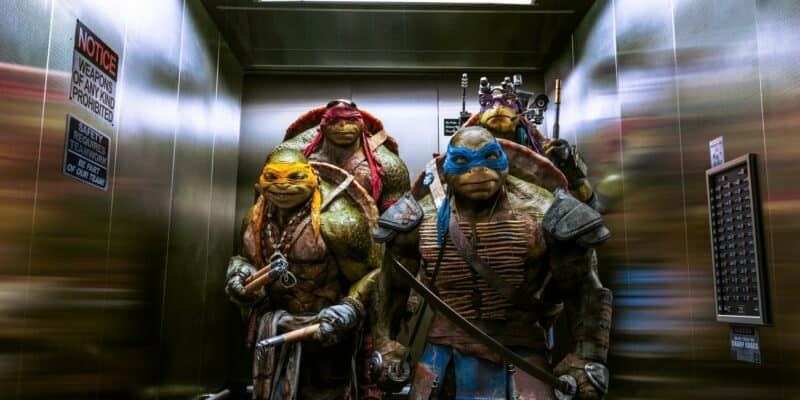 Earlier this year, Paramount Pictures announced that there are are several Teenage Mutant Ninja Turtles movies in development, some of which will focus on different villains from the TMNT universe and which will stream on Paramount+ some time during 2023.

However, we’ve known for some time that there are also two theatrical Teenage Mutant Ninja Turtles movies in the works — one a live-action reboot from SNL writers Casey and Colin Jost and producer Michael Bay, and the other a CG animated project from Seth Rogen.

As for the CG film, a lot was recently unveiled by Paramount Pictures. Produced by comedy duo Seth Rogen and Evan Goldberg and co-directed by Jeff Rowe and Kyler Spears, the upcoming Teenage Mutant Ninja Turtles reboot now has an official title and release date.

These were recently confirmed by Seth Rogen on Twitter, in a post that includes some funky, comic book/graffiti-inspired artwork for the movie that just “oozes” mutant mayhem.

“Teenage Mutant Ninja Turtles: Mutant Mayhem is in theaters one year from today!!!!!”

Teenage Mutant Ninja Turtles: Mutant Mayhem (2023) will be released in theaters on August 4, 2023, and will be the seventh theatrical movie in the TMNT series.

However, the film is not a continuation of either one of the two current theatrical timelines. While little is known about the plot, in an interview with Collider back in 2020, Seth Rogen said the following about Teenage Mutant Ninja Turtles: Mutant Mayhem:

“As a lifelong fan of Ninja Turtles, weirdly the ‘Teenage’ part of Teenage Mutant Ninja Turtles was always the part that stuck out to me the most. And as someone who loves teenage movies, and who’s made a lot of teenage movies, and who literally got their start in their entire profession by writing a teenage movie, the idea of the kind of honing in on that element was really exciting to us. I mean, not disregarding the rest, but really using that as kind of a jumping-off point for the film.”

And last year, he tweeted bios for each of the Turtles, as well as excerpts from Leonardo’s journal, one of which can be seen below:

In February this year, two concept art images were leaked, both of which can be seen below in a tweet from GVN News:

In an interview with Variety in June, Paramount’s chief Brian Robbins discussed the film, saying:

“It’s animated, and it goes back to the roots of the Turtles. Seth and his producing partner Evan Goldberg were brilliant choices because no one can tell stories about being teenagers better than those guys. They’re passionate and super nerdy about the Turtles. It’s going to work for kids, parents, Gen Z-ers and Millennials. We have plans to do multiple animated movies this way, but one day we might go back to a hybrid live-action version of the Turtles.”

It all sounds pretty exciting, but it’s no mystery that Seth Rogen and Evan Goldberg are no strangers to R-rated material — This Is the End (2013), The Interview (2014), and the hugely controversial CG animated Sausage Party (2016), to name but a few — so should fans be concerned?

It’s really that last movie that makes us wonder whether Teenage Mutant Ninja Turtles: Mutant Mayhem will be R-rated, which will be a first for the franchise. While TMNT fans have been calling for an R-rated reboot for years, a Sausage Party-style movie definitely isn’t what they’re after.

With that all said, Rogen is also no stranger to family-friendly projects, either, with the live-action remake of The Lion King (2019) coming to mind. Not only that, but Robbins’ comments about the new film working for “kids, parents, Gen Z-ers and Millennials” likely means we have nothing to worry about.

Teenage Mutant Ninja Turtles: Mutant Mayhem will be released in theaters on August 4, 2023. The film will feature a 2D-style animation similar to Spider-Man: Into the Spider-Verse (2018).

Are you excited for Teenage Mutant Ninja Turtles: Mutant Mayhem? Let us know in the comments down below!