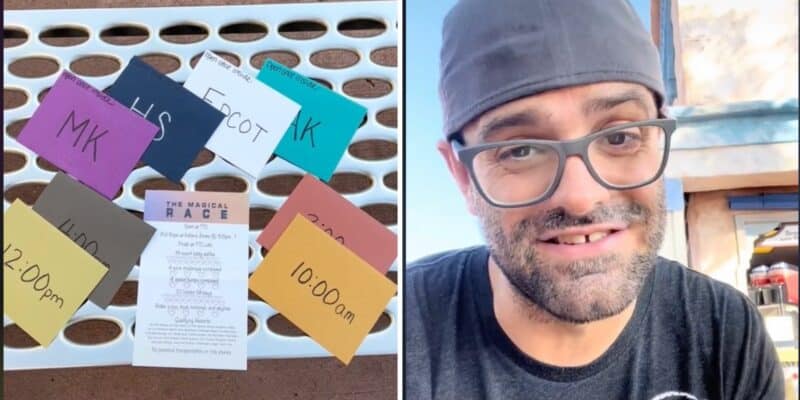 20 hidden Mickeys, 18 Resort lobby selfies, 4 Parks, 4 “speedbumps,” and 4 modes of transportation make for one “Magical Race” at Walt Disney World. Invented by Disney Fans Jason and Danielle, The Magical Race and The Walt Disney World Scavenger Hunt are both available for purchase online for Guests brave enough to try them.

The Magical Race package comes with instructions, as well as sealed envelopes containing park challenges and timed “speed bumps,” which contain variables intended to slow down racers and prolong their mission.

The instructions contain a list of qualifying Resort hotels for the selfie challenge, as well as a disclaimer on the bottom that prohibits the use of personal transportation or ride shares.

Jason recapped his own experience with Magical Race on his TikTok account in June.

Full recap of The June 20th Magical Race Live event presented by me, planned by @Danielle. Sponsored by @Discover The Magic featuring @Lemuel and @Kirk

Full recap of The June 20th Magical Race Live event presented by me, planed by @Danielle. Spinsored by @Discover The Magic featuring @Lemuel and @Kirk

Jason starts the clip by introducing his fellow racers and friends, fondly known in the Disney TikTok community as @walruscarp and @magicbandsandtrashcans. This Magical Race was Game Mastered by Jason’s wife, presumably to keep the details confidential until race day.

Jason gives his friends a starting count before they take off in different directions to kick off the race, which he claimed should “only take them a few hours.”

The Magical Race creator started his day in EPCOT where his Park-specific envelope gave him the choice between taking “a ride through history to spot the board game where you collect cheese,” or “feasting on Regal Eagle’s mac and cheese.”

“Time to get in line,” he said as he approached the queue for the iconic Spaceship Earth attraction.

His 10 a.m. speed bump envelope required that he participate in a round of basketball or speedball in an arcade, so he caught the Skyliner to Disney’s Riviera Resort, Disney’s Pop Century Resort, and Disney’s Art of Animation Resort with arcades on the brain.

By noon, Jason had bussed to Disney Springs and opened his next speed bump envelope, which required him to buy two Mickey ice cream bars; one to eat, and one to give away in order to “pay the magic forward.”

He then boarded a boat to officially complete the transportation portion of the challenge and made his way to Disney’s Port Orleans to check off more resorts.

Animal Kingdom and the third speed bump’s envelopes were up next, followed by the scheduled 3:15 pm check-in at Hollywood Studios that saw the three friends reunited for the first time all day. When presented with the choice to either sit down and eat at Woody’s Lunch Box or ride Rock ‘n’ Roller Coaster Starring Aerosmith, Jason chose the latter.

Next up, Jason caught a bus to Magic Kingdom where he had to ride the Tomorrowland Transit Authority PeopleMover for his last attraction challenge.

With a few more resorts and hidden Mickeys to go, Jason was in the home stretch of the Magical Race. He finished the challenge in a jog, realizing that his friends were not far behind.

The designated finish line was located in front of a sign outside of the Transportation and TicketCenter.

“Such a fun experience, won it by a minute,” Jason said, followed closely by @walruscarp. “Still waiting on @magicbandsandtrashcans, definitely had a great day.”

The event was live streamed for their followers on each of the friends’ social media accounts. A week later, Jason posted a lengthy race-recap video to his YouTube channel, which fans can watch by clicking here.

Jason ended the TikTok by inviting viewers to catch all the action live during the “next race,” which has yet to be announced.

Would you ever try the Magical Race? Let us know in the comments below.