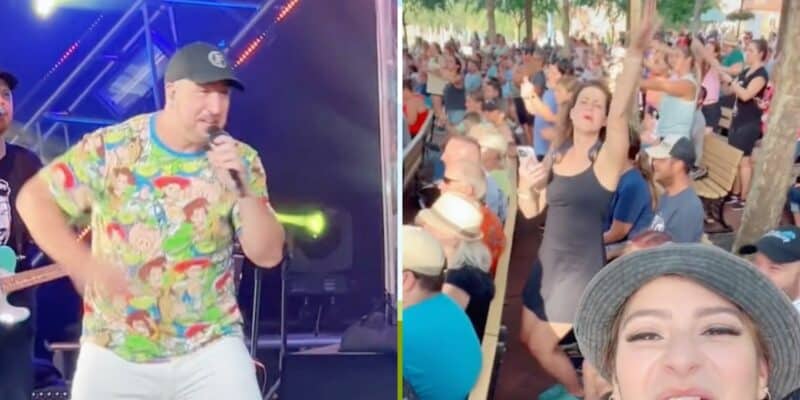 What do reality stars, a resident squirrel, and a 90’s heartthrob all have in common? They all recently took the stage at EPCOT to perform for screaming Millennials attending this year’s International Food & Wine Festival.

The 2022 Eat to the Beat Concert Series at EPCOT runs from July through November with scheduled performances by some major household names. Disney Parks Blog shared the lineup back in June:

Today marks the end of Joey Fatone & Friends’ run on the EPCOT stage, and the performances were anything but predictable.

Joey Fatone is best known as one-fifth of the boyband NSYNC, who rose to pop fame in the late 1990s. With top hits that most 30-somethings can easily still sing along to, Joey’s performance brought Millennials out in droves to find out what he’d be performing and better yet, who he’d bring with him.

Calling it the “crossover of the year,” this TikToker shared a video of one of Joey’s performances:

♬ Can’t Take My Eyes off You – Frankie Valli

In @pagingmrmorrow’s clip, Joey can be seen performing Frankie Valli’s “Can’t Take My Eyes Off You,” not with fellow former bandmates, but with Impractical Jokers’ Murr joining him center stage.

Impractical Jokers is a truTV reality series in which three best friends “compete to embarrass each other amongst the general public with a series of hilarious and outrageous dares,” according to the show’s official description.

Commenters agreed though, that as Murr joined Joey in song, he appeared anything but embarrassed. The video concluded with a chaotic view of dancing Guests singing along to NSYNC’s ever-popular “Bye Bye Bye.”

Another TikTok video called one of Joey’s performances “what Millennial dreams are made of,” stating that he was still a legend all these years later. Joey poked fun at the lengthy time lapse as well, pretending to experience back pain executing some of his classic dance moves to NSYNC’s “Tearing Up My Heart.”

This is what millennial dreams are made of! Thank you @JOEY CALZONE & friends and @disneyparks for a truly memorable night! My boy band loving 90s baby heart is so happy! #epcot #foodandwinefestival2022 #eattothebeat #nsync #joeyfatone #90sbaby #disneyparks #disneyworld #joeyfatonensync #nsyncfan #backstreetboys #4town #4townturningred

In a shocking twist, @wifelifemagic’s clip also shows Joey belting out a song that any true fan will tell you is not a part of NSYNC’s repertoire. Guests were in for a surprise when Joey performed “I Want It That Way,” a song that belongs to rivaling 90’s boyband Backstreet Boys, serving up an added layer of nostalgia.

But perhaps the strangest thing to happen during one of Joey’s set lists involved a squirrel and a cigarette.

In @waltdisneyworldparks’ clip, EPCOT native Stanley the Squirrel made a running cameo across the stage, straddling audio equipment with a cigarette in its mouth. Fans in the audience recognize the animal as a regular visitor.

Joey’s unpredictable performance is being remembered by those in attendance as “an incredible experience” and “truly memorable.”

Inside the Magic spoke exclusively to Joey Fatone and Joe Mulvihill regarding the success and audience reactions to Joey Fatone & Friends this past weekend, and the love and appreciation from the two are certainly stronger than words. For the full interview, click here.

Did you catch Joey & Friends at the 2022 Eat to the Beat Concert Series at EPCOT? Tell us in the comments below!