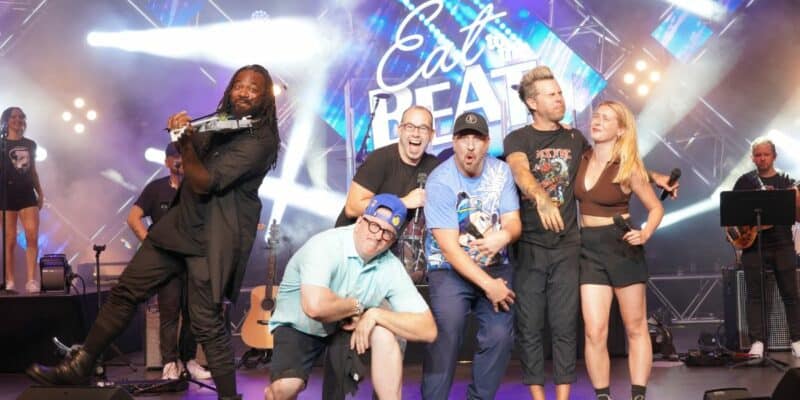 Joey Fatone and Joe Mulvihill, Producer/Manager, are huge Disney fans, even visiting EPCOT’s Food and Wine Festival as often as possible with their parents to see the various acts that would show up for the Eat to the Beat Concert Series. So, when Joe and Joey had the opportunity to work together with Disney and bring Joey Fatone‘s talents to the stage, it was truly a dream come true.

The 2022 Eat to the Beat Concert Series at EPCOT, which is part of the Food and Wine Festival, runs from July through November with scheduled performances by some major household names — most recently being Joey Fatone & Friends.

Inside the Magic spoke exclusively to Joey Fatone and Joe Mulvihill regarding the success and audience reactions to Joey Fatone & Friends this past weekend, and the love and appreciation from the two is certainly stronger than words.

Joe Mulvihill, Joey Fatone’s Producer/Manager, first booked Boyz II Men about 10 years ago and it changed the way of EPCOT’s Eat to the Beat Concert Series. “It started getting more, not modern acts, but different acts and it started expanding it out,” Mulvihill told Inside the Magic exclusively. And that’s where Joey Fatone came in.

Although Joey Fatone is best known for being a member of the boyband NSYNC, who rose to pop fame in the late 1990s, he is also known for his love of Broadway and his fun-loving personality and energy.

Mulvihill, who developed a great relationship with the entertainment people at Disney over the years, was one day talking to Joey Fatone, which is when Joey had an idea for a different type of show.

“Man I want to do a variety show,” Joey said, and although this was not something Disney typically went for, Mulvihill asked Disney anyway. “I was talking to Disney and said ‘we’ve got a thing called Joey & Friends and we’d love to try it out at Food and Wine’, and they were like ‘Okay sounds good to me, if you guys want to do it’,” he told Inside the Magic.

2019 marked the first Joey Fatone & Friends show, and it was a huge success. “Needless to say it was such a fun kind of concoction,” he said. “It was so much fun and then from there we started doing stuff around the country; doing private parties like with Joey Fatone & Nick Carter from Backstreet.”

Mulvihill told Inside the Magic that the private parties grew into this “Joey & Friends concoction” where they cater it to whoever the audience is — something they still do to this day.

For the 2022 EPCOT Eat to the Beat Concert Series specifically, Joe and Joey decided to invite Megan, a singer who they heard while dining in a New York City restaurant. After hearing her voice, the two spoke to her, and decided to fly her out to Disney as they wanted to give her a chance to share her talent with the world and “she absolutely killed it,” Joe said.

They also had Impractical Jokers’ Murr who performed Frankie Valli’s “Can’t Take My Eyes Off You,” alongside Joey Fatone, which many fans called the “crossover of the year”.

“We know the Disney audience and there’s nothing more satisfying than putting something together, not only at Disney, but something of quality where people leave and say ‘now that was entertainment’,” Mulvihill told Inside the Magic.

The fans posted various videos to social media over the weekend, one of which called one of Joey’s performances “what Millennial dreams are made of,” stating that he was still a legend all these years later — something Joey Fatone himself loved to see and hear.

The NSYNC member even goes as far as watching his audience as he performs, and as others in his show perform, to gather reactions. “We’re pretty good judge of audience so if they’re not happy we’re like ‘alright lets see what works and what doesn’t’,” Fatone told Inside the Magic. “The shows that we’ve done now have given me a little more, not so much confidence but more as far as repertoire.”

Joey Fatone described his shows a “well-oiled machine”, but that doesn’t stop them from continuing to grow and change the show so that it appeals to every audience. “We try to do something different every single time so if somebody goes back to the show, they know they’re getting not the same show, they’re getting something a little bit different,” Fatone told Inside the Magic.

When Joey was at the EPCOT this past weekend, he also had the chance to enjoy the theme parks, being a Disney lover and an Annual Passholder himself.

“This is how dedicated Joey is as a Disney fan, he loves bringing people in, bringing them around the Park, showing them Hidden Mickeys, telling all the backstories, explaining all the trivia, like he’s into it into it,” Mulvihill said.

“I mean you ride Toy Story with him and he’s screaming at you all the codes to unlock all the balloons for 5,000, you have no idea how ridiculous this clown is,” he said laughing.

But Joey’s passion for Disney is one of the reason why Joey Fatone & Friends works so well at the EPCOT Food and Wine Festival — because he understands the passion and love of Disney-goers and would love to keep bringing magic year after year to the Eat to the Beat Concert Series.

Did you get the chance to see Joey Fatone & Friends at EPCOT? Let us know in the comments below.